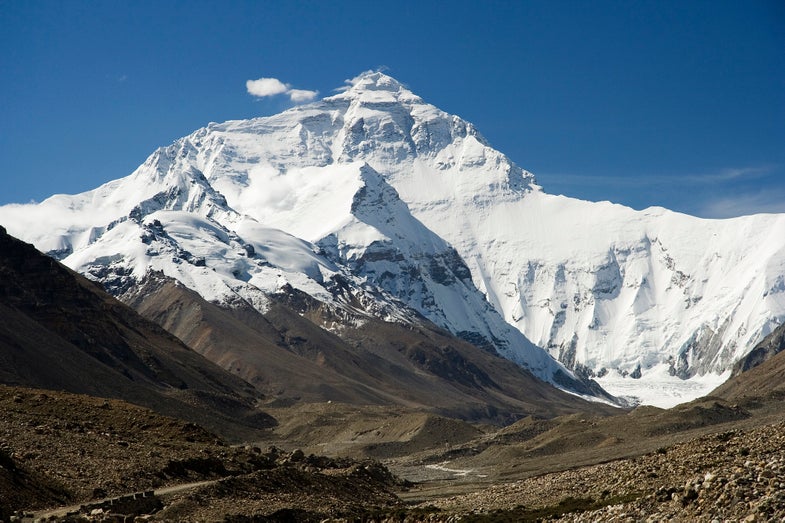 Changes on the planet are affecting the world’s tallest mountain, casting doubt on its climbability and even its height. Sherpas are wondering whether warmer climates will render Mount Everest too dangerous to summit, and geologic changes in the Himalayas have raised uncertainties about its altitude, according to separate reports.

You might think a warmer climate would render Everest easier to climb — fewer treacherous glaciers and snowbanks and so forth — but the opposite is true. Rockslides are increasing, and it’s much more difficult to clamber up bare rocks than to use metal crampons on thick ice. The conditions are deteriorating so much that the mountain may be unclimbable in a few years, according to Apa Sherpa, a Nepali climber who has reached the summit a record 21 times.

Himalayan communities are already facing dramatic climate shifts, according to AFP, which interviewed Apa Sherpa while he’s participating in a 120-day hike. Glaciers have shrunk by 21 percent in the past 30 years, and it is getting colder in the winter and hotter in the summer.

Meanwhile, Nepal is soliciting help to re-measure the peak, to settle a dispute over its height. Nepal wants to use Everest’s snow height as part of the official altitude measurement, but China, which borders the mountain range, wants to use its rock height. Other peaks get to use the snow height, Nepal points out. This has been the subject of a longstanding dispute between China and Nepal, with the Nepalese government insisting the world’s highest peak is 11 feet taller than China says it is.

Changing snowpack aside, this dispute is made even more complex by the Himalayas’ dynamic nature — it’s a young mountain range that is still rising as the Indian subcontinent slides under Eurasia.

Measuring Everest is no small feat, as the BBC reports. You would need GPS equipment that can function in -50 degree temperatures, sherpas who can operate the technology, and a data processing system that the international community would accept. The last official measurement was in 1999, when an American team using GPS measured a height of 29,035 feet (8,850 meters). Previously, Everest was measured at 29,028 feet (8,848 meters).