Fashioning Apollo: What to Wear Into the Hostile Realms of Space

A history of how to dress when leaving the planet 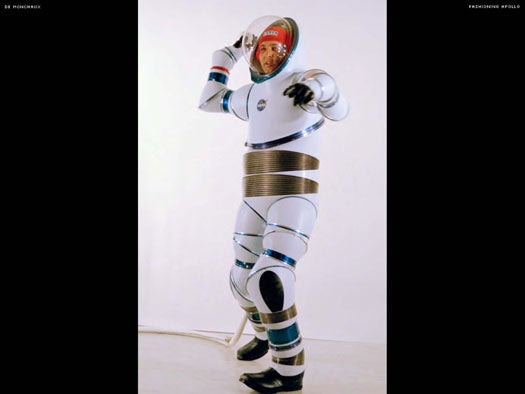 After 1965, the most serious competitor to the ILC suit for later lunar missions was a hard, one-piece suit manufactured by the stratospherically successful (if ultimately disgraced) corporate conglomerate Litton Industries. Even as they failed to meet the standards for lunar use, the streamlined suits were staged by NASA as the future of space travel through the 1970s. Courtesy Nicholas de Monchaux
SHARE

PopSci recently co-hosted an event called Thrilling Wonder Stories. Architects, designers, journalists, musicians, novelists and, yes, scientists spoke about their work—which everything from UFO mythology to the history of terraforming. Each presenter was also asked to consider the near future, to think about and sometimes even show us what their vision for the future might look like. The event takes its name from a mid-20th century science fiction pulp magazine, and the allusion is apt. Each talk began in the past, with real research and real facts, and used that as a springboard to envision what will happen tomorrow, or next year, or next decade.

Often these visions were fantastic. You can see why PopSci would want to be a part of this, seeing as we’re all about the future, even the far-out version (have you seen our old covers?). So, here is our vision for the next several weeks: videos of some of the talks, photos and summaries of others, and Q&A’s with a few of the speakers. It was a thrilling and wondrous weekend, and we aim to share it.

First up, Nicholas de Monchaux, who is an assistant professor in the University of California, Berkeley’s architecture department. He talked about his book “Fashioning Apollo,” which is about spacesuits and fashion. He explains it best:

One of the things I find most fascinating about the idea of the spacesuit is that space is actually a very complex and subtle idea. On the one hand, there is space as an environment outside of the earthly realm, which is inherently hostile to human occupation—and it was actually John Milton who first coined the term space in that context.

Whether it’s the early French balloonists bringing capsules of breathable air with them or it’s the Mongolfier brothers trying to burn sheep dung to keep their vital airs alive in the early days of ballooning, up to the present day, space is actually defined as an environment to which we cannot be suited—that is to say, fit. Just like a business suit suits you to have a business meeting with a banker, a spacesuit suits you to enter this environment that is otherwise inhospitable to human occupation.

From that—the idea of suiting—you also get to the idea of fashion. Of course, this notion of the suited astronaut is an iconic and heroic figure, but there is actually some irony in that.

For instance, the word cyborg originated in the Apollo program, in a proposal by a psycho-pharmacologist and a cybernetic mathematician who conceived of this notion that the body itself could be, in their words, reengineered for space. They regarded the prospect of taking an earthly atmosphere with you into space, inside a capsule or a spacesuit, as very cumbersome and not befitting what they called the evolutionary progress of our triumphal entry into the inhospitable realm of outer space. The idea of the cyborg, then, is the apotheosis of certain utopian and dystopian ideas about the body and its transformation by technology, and it has its origins very much in the Apollo program.

But then the actual spacesuit—this 21-layered messy assemblage made by a bra company, using hand-stitched couture techniques—is kind of an anti-hero. It’s much more embarrassing, of course—it’s made by people who make women’s underwear—but, then, it’s also much more urbane. It’s a complex, multilayered assemblage that actually recapitulates the messy logic of our own bodies, rather than present us with the singular ideal of a cyborg or the hard, one-piece, military-industrial suits against which the Playtex suit was always competing.

The spacesuit, in the end, is an object that crystallizes a lot of ideas about who we are and what the nature of the human body may be—but, then, crucially, it’s also an object in which many centuries of ideas about the relationship of our bodies to technology are reflected. 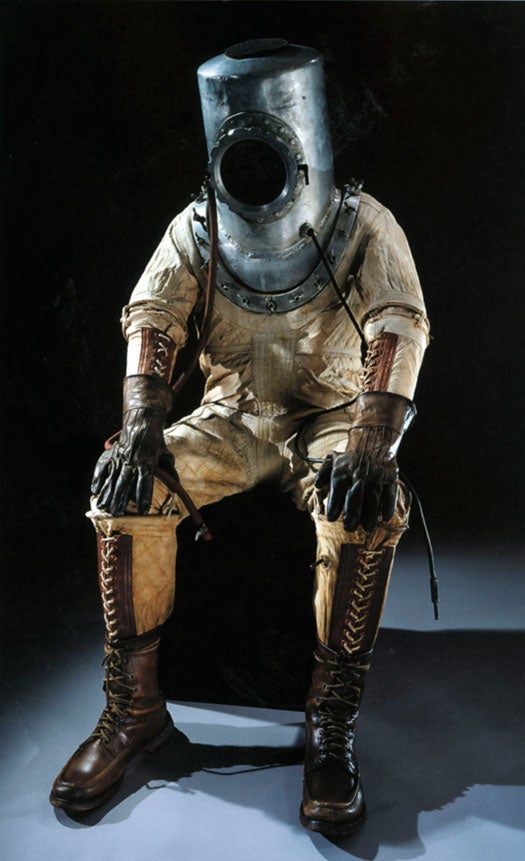 Birth of the “Space Suit”

The first high-altitude “space suits” were less technocratic achievements than feats of adaptation. In 1934 such a hand-formed “tire shaped like a man” brought aviator Wiley Post to the limits of the stratosphere. 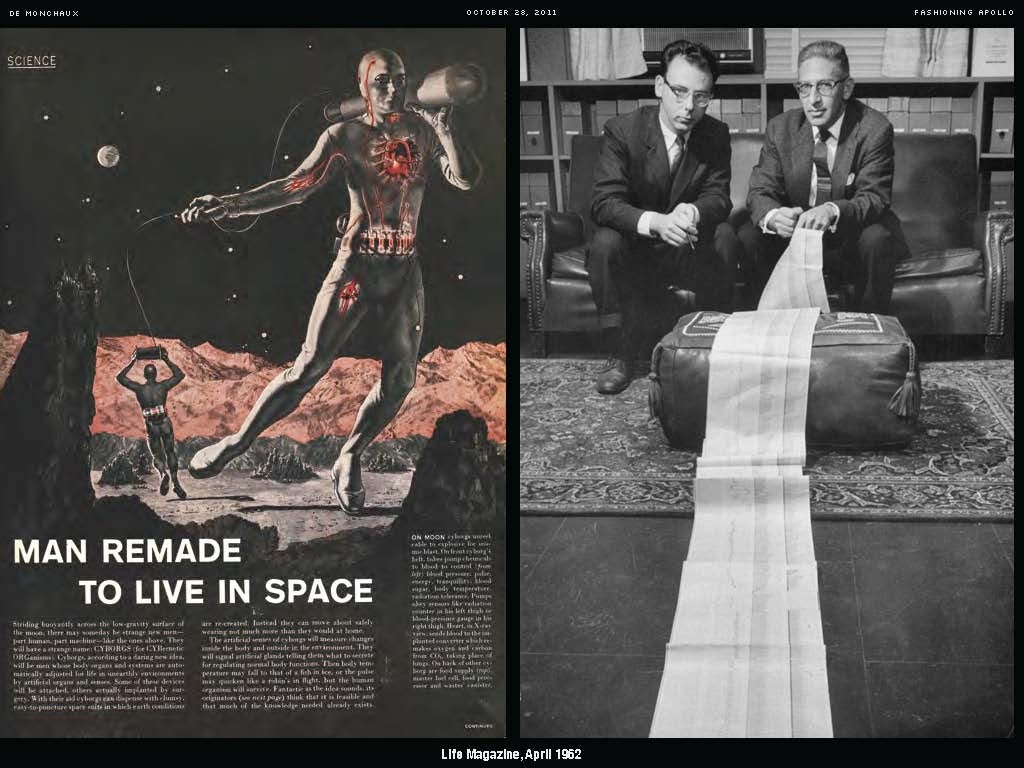 While primitive suits inspired by Post’s were investigated by the armed forces after World War II, more synthetic notions of man in space gained credence. Notable was the neologism “cyborg,” a man-machine hybrid proposed by Nathan Kline and Manfred Clynes. Clynes, a mathematician and analog computer expert, and Kline, a psychopharmacologist, proposed that instead of carrying an earthlike environment with him, the biochemistry and homeostatic functioning of man should itself be adapted for space travel. Grounded in the same theories of cybernetic control that shaped parallel advances in systems management, the cyborg concept for space exploration was studied intensively before its eventual abandonment in 1966. 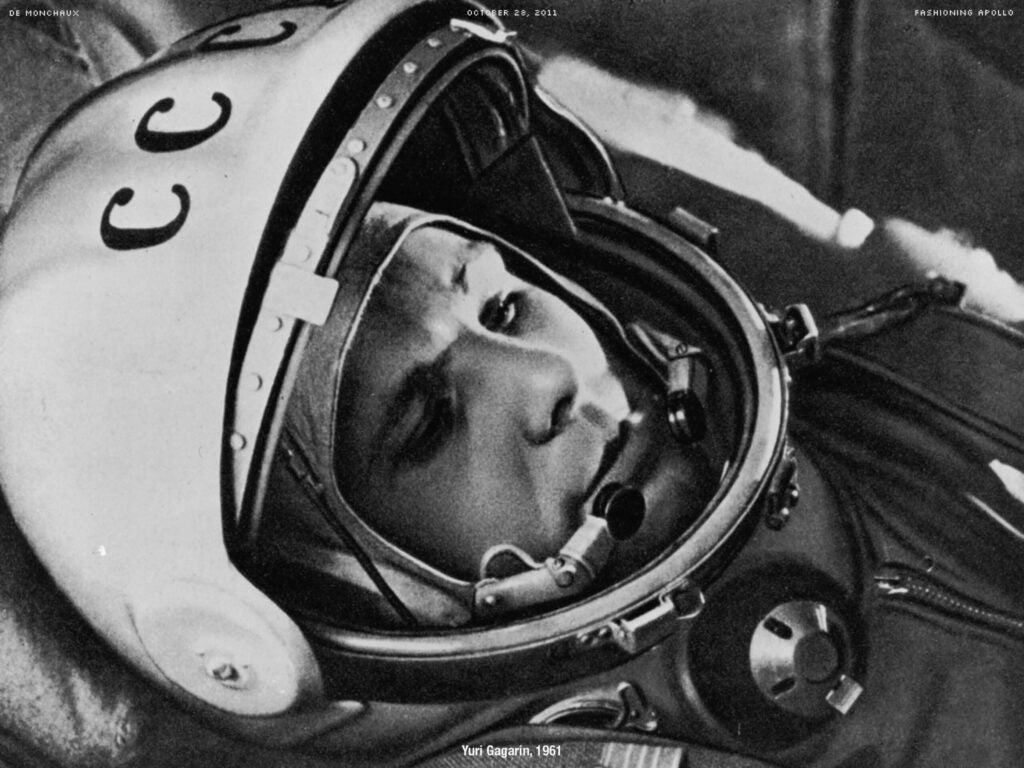 Soon came the launch of Sputnik. With the Soviet achievement, the United States accelerated its space efforts, borrowing missiles and management systems from the armed services and hastily adapting high-altitude flight suits to serve in space. In pressure suit design, military green was (literally) sprayed silver, as the iconography of science fiction shaped space flight’s swiftly constructed facade. Yuri Gagarin’s 1961 spaceflight catalyzed that battlefield of the Cold War known as the space race, the establishing of missile superiority through the launch of man. However, the Soviet bureaucracy that had enabled the feat suppressed vital facts of the flight, including the fact that Gagarin landed only in his spacesuit, parachuting from the unstable Vostok capsule high above the earth. The particular history of spacesuits in the Soviet context is an essential and incongruous contrast to the American epic. 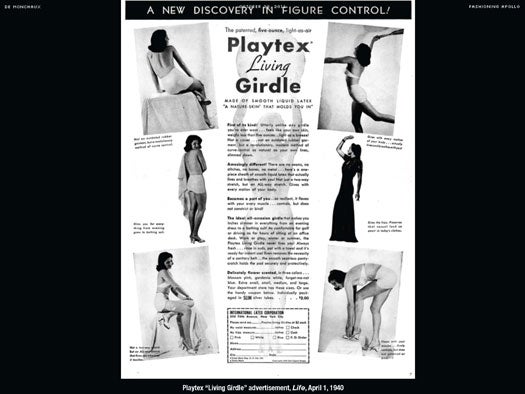 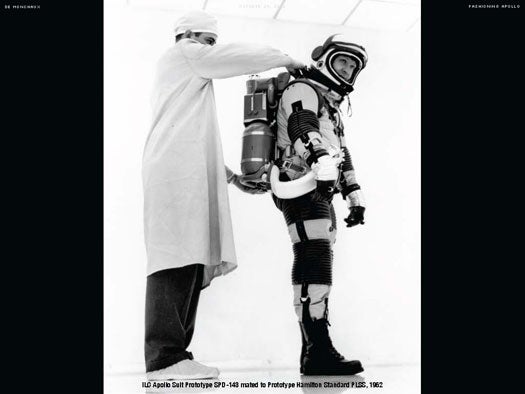 Instead of physiologically adapting man for space (as the cyborg model proposed), the groundbreaking research of the space age was into the real, and modest, limitations of the unaltered human body. After literally exhaustive tests, these limits were incorporated into NASA’s design systems just as readily as booster thrust or orbital apogees. 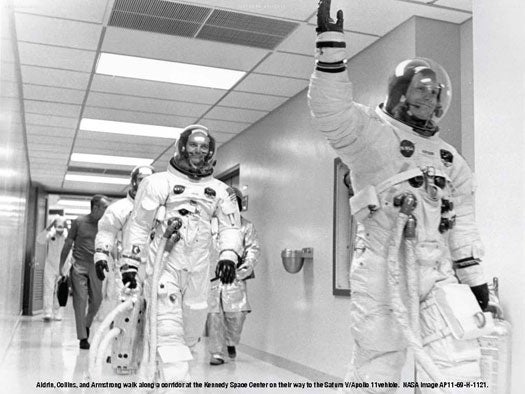 While the resulting landing on the moon shaped the visual language of our century, a greater influence arguably belongs to the virtual landscapes first crafted by NASA to allow the extensive simulation and training of lunar landings on the tight Apollo schedule. The race to the moon was a massive exercise in parallel real and simulated realities, from necessary advances in computing technology to the huge twin control rooms in Houston that alternately held real and virtual missions. 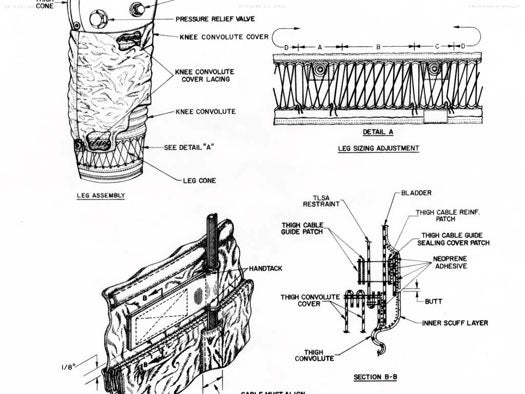 ILC’s subsequent effort was one of adaptation, both physical and organizational. Handmade assemblages of fabric, latex, and nylon were hand-sewn to minute tolerances, and custom-fitted to each astronaut. Indeed, the production of the suits met both physical and institutional barriers within the military-industrial complex, from X-ray scans to uncover errant pins, to a spirited debate on whether and how clothing sizes, as opposed to serial numbers, could be used to describe variations in individual suits.

After 1965, the most serious competitor to the ILC suit for later lunar missions was a hard, one-piece suit manufactured by the stratospherically successful (if ultimately disgraced) corporate conglomerate Litton Industries. Even as they failed to meet the standards for lunar use, the streamlined suits were staged by NASA as the future of space travel through the 1970s. 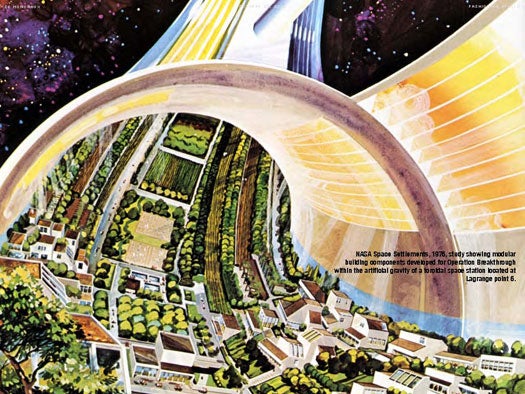 As the lunar landing was a media event, so was it a feat of broadcast technology—particularly at the most-viewed American news source, CBS. Designed at the same time as Kubrick’s 2001 (and by the same set designer, Douglas Turnbull), the CBS lunar broadcast soundstage incorporated more simulations, asynchronous sequences, and other trappings of modern broadcasts than any other television event of its time. As well as a cultural touchstone, it was the foundation for our contemporary, 24-hour news cycle. 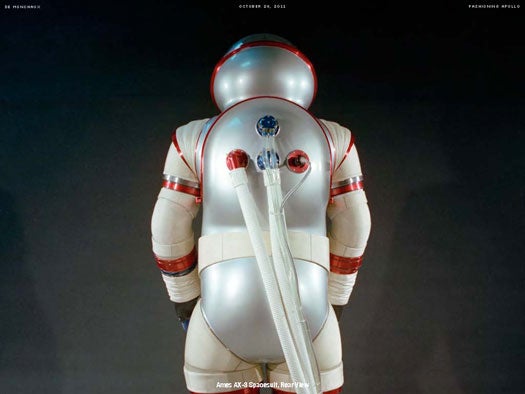 Sharing the sleek geometries of CBS’s soundstage, the alternative suits most beloved of design historians are the AX series of experimental suits developed by NASA’s Ames Research Center. The suits provide important clues to the culture, and contours, that form the most seductive face of the space age. 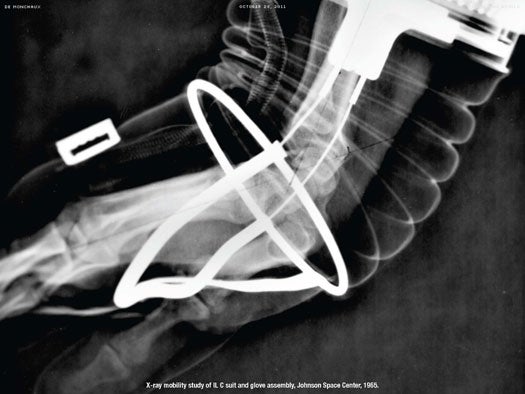 These lessons regarding the body in space could be extended to larger architectural contexts through a system of analogy alone. Yet important historical links exist as well. Systems engineers and policymakers of the late 1960s sought to literally apply the lessons of Apollo to the pressing problems of cities. In these efforts they followed not the soft surface of spacesuits, but rather what they understood as the hard truths of systems engineering. And so, as with the cyborg, the subsequent failure of these efforts was as systematic as it was superficial.
clothing
events
fashion
Science
Space