A new DNA-based logic circuit can sense the signs of cancer, compute that a cell is cancerous, and then cause... 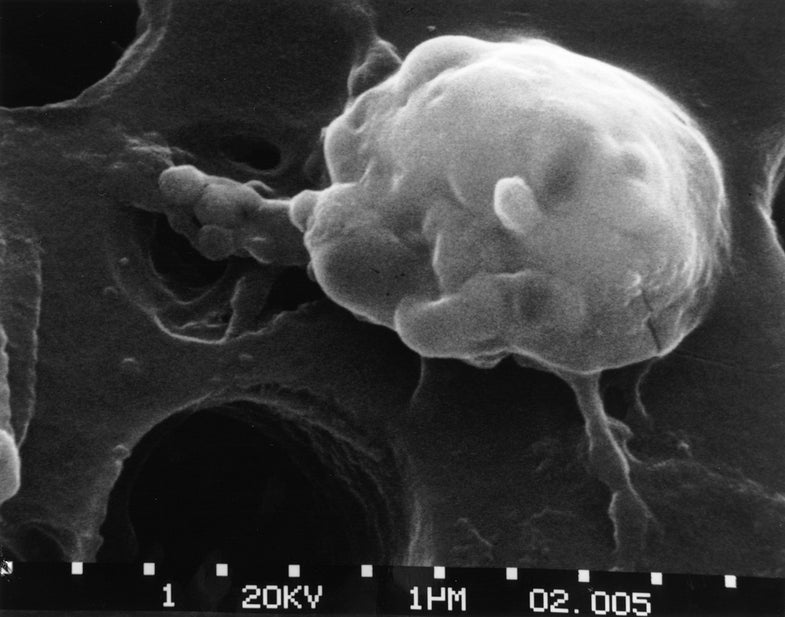 A new DNA-based logic circuit can sense the signs of cancer, compute that a cell is cancerous, and then cause it to self-destruct, researchers say. The cell-level diagnostic system could be used for drug screening or perhaps for disease treatment, killing tumors while leaving healthy cells alone.

In principle, the circuit works like any other logic circuit: It analyzes multiple inputs and makes a decision. In this case, the circuit really consists of genes that can detect up to five cancer-specific molecules and their concentrations. When all five of those characteristics are present, the circuit makes a positive determination, and then it triggers cell death.

In a new study, researchers from MIT and ETH Zurich worked with HeLa cells, a prolific type of cervical cancer cell. They studied the cells’ microRNA, which regulates gene expression by destroying messenger RNA, the substance that brings the DNA blueprint to the rest of the cell. They eventually pinpointed one microRNA combo that was unique to HeLa cells. This is no small feat by itself — there are about 1,000 versions of miRNA in humans, according to MIT News. Each type of cancer has a unique miRNA profile.

Once they had the right combination, the researchers designed a synthetic gene which codes for a protein that promotes apoptosis, or programmed cell death. The special gene would turn on in the presence of miRNA levels that match the HeLa profile.

“The biocomputer combines the factors using logic operations such as AND and NOT, and only generates the required outcome, namely cell death, when the entire calculation with all the factors results in a logical TRUE value,” Yaakov Benenson, a professor of synthetic biology at ETH Zurich, said in a statement.

If the miRNA levels were too high or too low, the gene would not switch on, and the cell would not be killed. Healthy cells, which would also lack the HeLa profile, would be similarly left alone, the researchers said.

The next step would be to test this system in a living animal, but this will be difficult. Current methods use viruses or chemicals to bring foreign DNA inside cells, but these make permanent changes, which could have their own complications. So the method is still far from being usable for cancer treatment, researchers said.

Still, it is an important step toward building a single-cell-level diagnostic method, Benenson said. The research was published in today’s issue of Science.