Attention hipsters and other people seeking hipness: there’s a new fad catching on in Western Australia’s Shark Bay, and you... 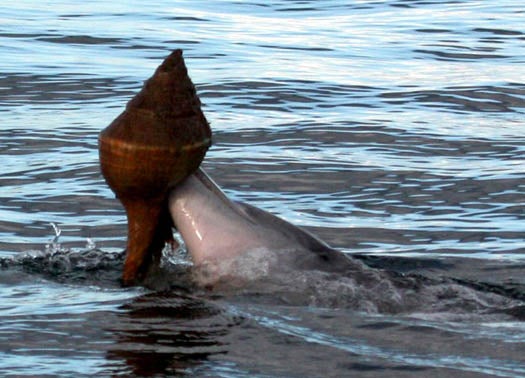 Attention hipsters and other people seeking hipness: there’s a new fad catching on in Western Australia’s Shark Bay, and you won’t want to be the last to to post pictures of yourself imitating it to your Tumblr feed. “Conching” is a method by which Indo-Pacific bottlenose dolphins are trapping small fish in conch shells, bringing the shells to the surface, and then shaking them with their rostrums to clear out the water and dump the fish into their mouths. More remarkably, the trend appears to be spreading throughout an entire population of dolphins, and fast.

The first isolated instances of conching were recorded in 2007 and 2009 among a small group of Shark Bay’s dolphins. But other dolphins seem to be observing that behavior and learning the method for themselves–in the last four months alone, researchers have documented the behavior six or seven times–marking a very rapid horizontal spread of behavior.

That’s significant on a few levels. For one, we already know dolphins are very intelligent creatures, but a horizontal spread of a learned behavior at this rate is pretty off-the-charts. Moreover, scientists appear to have gotten in on this fad at the ground floor (they were observing dolphins conching way before it was mainstream, bro), so they have the opportunity to observe this learned behavior as it spreads.

There are still a lot of questions about how exactly dolphins execute a good conch. Researchers have seen the end result at the surface, but are curious as to how the behavior unfolds underwater. Do the dolphins manipulate the shells to scoop the fish in, or do they turn them so the opening is facing up and then chase fish into them? If the latter, it suggests a good deal of foresight and premeditation on the part of the dolphins–yet another tantalizing finding for biologists and behaviorists.

As such, researchers at Shark Bay are thinking about setting up underwater experiments and cameras to capture the act of conching from start to finish. Because dude, a conching doesn’t count unless it’s photographed. No word on whether they’ll Instagram the images to make them look vintage before posting them to Facebook.