A nearby galaxy that looks like a smiley face harbors a dark secret: It has twin supermassive black holes, not... 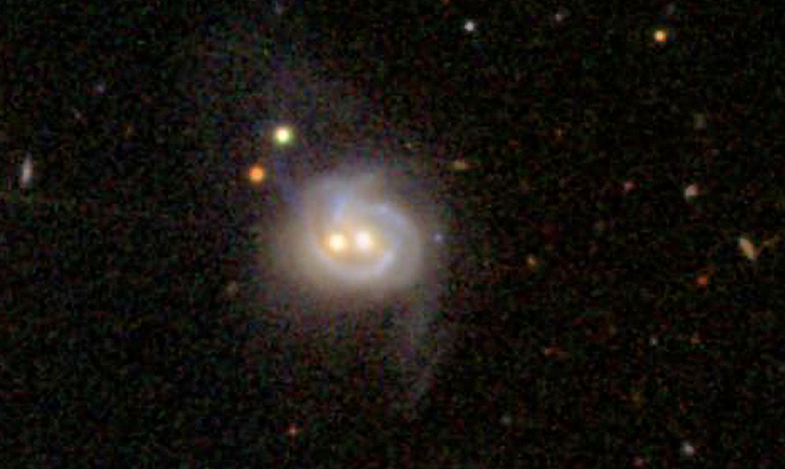 A nearby galaxy that looks like a smiley face harbors a dark secret: It has twin supermassive black holes, not just one. This rare find could shed light on what happens when ginormous galaxies collide.

Supermassive black holes churn at the heart of most galaxies, including our own, weighing millions of times the sun’s mass and radiating billions of times more energy. These black holes sometimes radiate so much that they’re considered active galactic nuclei, but that type is very rare, comprising only about one percent of galaxies. It’s even more unusual, then, to find a galaxy with twin AGN. This is only the second one ever found.

Astronomers think stupendously disruptive events like galaxy collisions could spur AGNs to switch on, by sending huge amounts of gas spiraling toward the pre-existing black holes. The gas gets superheated as it falls toward the event horizon, radiating X-ray energy. It stands to reason, then, that some galaxies would have two AGNs — two products of a merger that occurred some time in the past. But astronomers weren’t finding any.

Researchers from the University of Maryland, the University of Hawaii and Yale University used the Burst Alert Telescope on NASA’s Swift satellite, which maps sources of intense radiation, to sniff out a possible twin. The Chandra X-Ray Observatory helped pinpoint Markarian 739’s second AGN, which was invisible in ultraviolet, visible and radio wavelengths.

Astronomers have long known that the eastern nucleus of the merging Markarian 739 formation contains an active black hole nucleus — now they know the western half, or the right eye in the smiley face, has one, too. The twins are about 11,000 light years apart, or a third of the distance separating our solar system from the center of the Milky Way. A paper about the new twin will be published in Astrophysical Journal Letters.

We look forward to the day when they combine into one uber-ginormous supermassive black hole, though it’ll be sad when the black hole smiley face ceases to smile back at us.