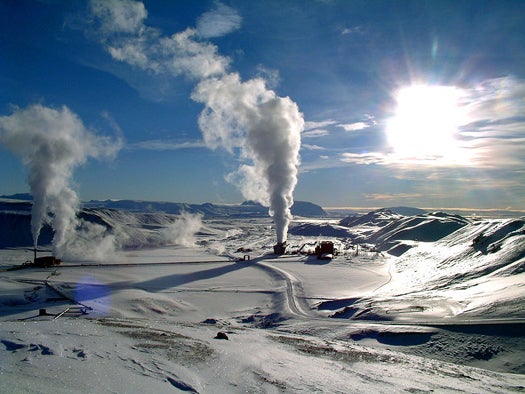 Common geothermal electricity setups generally involve extracting hot water from subterranean rock formations deep inside the Earth’s crust and using that heat to turn turbines. Common carbon sequestration schemes involve pumping carbon dioxide from the surface deep into the ground to prevent it from becoming atmospheric CO2. I think you can see where we’re going here.

In any case, two University of Minnesota Earth Sciences researchers were able to pu two and two together. What would happen, they asked, if you replaced the water in conventional geothermal rigs with compressed carbon dioxide? Models suggest that the new CO2-based method–termed CO2-plume geothermal, or CPG–should work just as well if not better, with the added benefit of sequestering carbon dioxide in the ground.

In fact, the researchers think it could work even better than water. For one, carbon dioxide penetrates porous rock more easily than water, so it could potentially be used in areas where conventional water-based geothermal wouldn’t work. Moreover, CO2 won’t dissolve minerals it comes in contact with as readily as water, so there’s less of a chance of CPG suffering from the mineral blockages that water can cause.

It’s important to note that this is just an idea at this point–the duo has applied for DOE funding (in addition to that it has already received for studies) to take CPG to the pilot stage. But if it works, it could be big. Grad student Jimmy Randolph, one of the two researchers behind CPG, tells UM News: “This is probably viable in areas you couldn’t even think about doing regular geothermal for electricity production. In areas where you could, it’s perhaps twice as efficient.”