On any battlefield, communication is key — troops must be able to communicate their own locations and that of their... 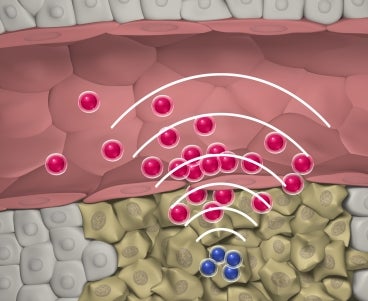 On any battlefield, communication is key — troops must be able to communicate their own locations and that of their target, so everyone knows exactly where to bring the fight. MIT researchers are bringing this strategy to the war on cancer, training swarms of cancer-fighting nanoparticles to communicate to do their jobs more effectively.

Specifically, researchers have developed nanoparticles that can guide each other to a destination, resulting in a much more effective onslaught against a tumor.

Nanoparticles could be a boon for cancer treatment because they can travel through the body unimpeded, delivering drugs directly into tumors and lessening the side effects of chemotherapy. But they quickly disperse when they’re released into the body — even in the best cases, only about 1 percent of them reach their intended target, according to MIT.

To improve this outcome, researchers from MIT, the Sanford-Burnham Medical Research Institute and the University of California-San Diego designed nanoparticles that can work in teams. One wave of nanoparticles homes in on a tumor, and when they arrive, they can communicate their location to the other nanoparticles still circulating in the body, helping them find the tumor too.

To do this, the nanoparticles take advantage of the body’s blood coagulation process, according to formal MIT doctoral student Geoffrey von Maltzahn, who is the lead author on a paper in Nature Materials describing this new work. At the site of an injury, blood clotting factors and other proteins interact in a chain of steps to form fibrin, which seals the wound and prevents further blood loss, as an MIT news release explains. The proteins not only bind to the area of an injury, but recruit other proteins to the area, von Maltzahn said.

“We’re trying to emulate that on the scale of synthetic particles, such that when one particle gets to the site of disease, it can communicate that event to expedite the subsequent arrival of other synthetic nanoparticles,” he explains in a video posted by MIT’s David H. Koch Institute for Integrative Cancer Research. (Watch it below.)

The researchers used two types of nanoparticles, which could either signal a message or receive it. The signaling particles flow through the bloodstream and arrive at the tumor site, where they trick the body into believing an injury has occurred (either by emitting heat or binding to certain proteins). This stimulates the natural fibrin-building process. Then the receiving nanoparticles, which carry a payload of cancer drugs, are outfitted with proteins that bind to fibrin. The fibrin acts as a homing beacon, helping the nanoparticles travel to the tumor site. They release the drugs once they get there, delivering a targeted blow to the cancer cells.

The researchers studied this method using mice and found that the communicating nanoparticles delivered 40 times more doxorubicin, a common chemotherapeutic, than a system that could not communicate.

MIT researchers are exploring how to test this system with existing clinical studies using nanoparticles.