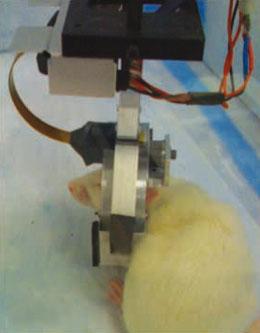 A new type of brain scanner attaches to a rat’s head, allowing neuroscientists to study the brains of fully awake, mobile lab animals for the first time.

The RatCAP, for Rat Conscious Animal PET, is worn over a rat’s head like a crown. A system of springs and motion stabilizers help the rat hold its head high and walk around.

Positron emission tomography scans enable scientists to study the molecular processes of brain activity, both in animals and in humans. To use the scanners, a patient has to lie down with his or her head in a machine. But good luck telling a lab rat to sit still.

Usually, animals are immobilized or given anesthesia, although those methods make it impossible to study the correlation between neurochemistry and the animals’ behavior, according to David Schlyer, a physicist at Brookhaven National Laboratory. Scientists wanted a scanner that could correlate PET data with behavioral data. 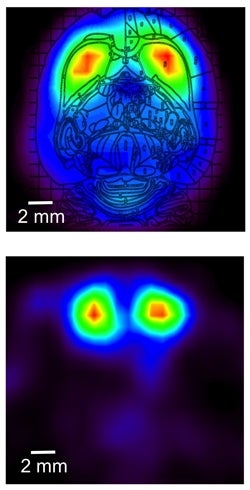 PET scans of a rat’s brain made with the RatCAP scanner.

They developed a tiny scanner that weighs 250 grams, and attaches to a rat’s head with a bracket that is screwed onto the skull.

The researchers wanted to test whether the wearable PET scanner could be used to correlate dopamine levels with the rats’ movement. They found that the more active the rats were, the lower the level of dopamine — a counterintuitive result, because dopamine increases are associated with excitability and reward.

The image at right shows the levels of a tracer chemical that binds to dopamine receptors located in the striatum.

The tests show the RatCAP can correlate brain chemistry measurements with behavioral observations, the researchers say.

The study included PET comparisons between the RatCAP subjects and rats that had been placed under anesthesia. The study is published in Nature Methods.