Today in cleverly designed solutions to old problems: University of Bristol engineers have devised a “hundred-year battery” that could report... 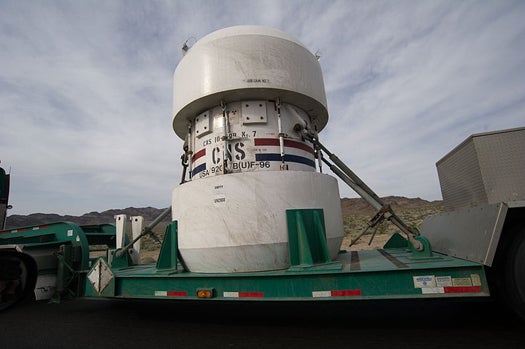 Today in cleverly designed solutions to old problems: University of Bristol engineers have devised a “hundred-year battery” that could report the state of buried nuclear waste repositories wirelessly to the surface 100 years after it–and the sensors connected to it–is buried, sealed, and cemented into the ground.

The problem here, of course, is that buried nuclear waste has to be completely sealed, meaning there can’t be any ductwork allowing wires to run from the surface to the inside of the containment facility. If there were water might get in or radioactivity might get out, negating the whole point of burying the waste in the first place.

But how to power sensors underground 100 years after they are buried? Conventional chemical batteries would long since have lost their charges. This answer entails a handful of magnets and a copper coil–the basis of a simple generator–and a 100-year timer.

The gist: two powerful neodymium magnets are set opposite each other about 15 centimeters apart, connected by a carbon fiber rod. A third doughnut-shaped magnet is wrapped around the rod, free to move along it in either direction. The end magnets would be polarized such that both repel this third magnet. The whole array is surrounded by a copper coil.

To set the battery, one would simply trap the doughnut-shaped magnet against one of the larger end magnets with a latch set to a 100-year timer; a century on, the timer releases the doughnut-shaped magnet, which is thrust along the rod to the other end where it is repelled by that magnet and pushed back toward the first magnet, and so on. Eventually the magnet comes to rest in the middle of the carbon fiber rod between the two repelling forces, but by then it has made several passes along the length of the copper coil, creating enough juice to charge the various sensors and transmitters necessary to get temperature and radioactivity data to the surface.

Of course, that raises the obvious problem of creating a 100-year timer to release the magnet. Researchers think such a latch could be triggered externally, perhaps by a radio signal. Because a 100-year mechanical clock would take a really, really long time to wind.