Russia Is Ready to Plunge Into Risky Arctic Drilling Projects, In Partnership With BP 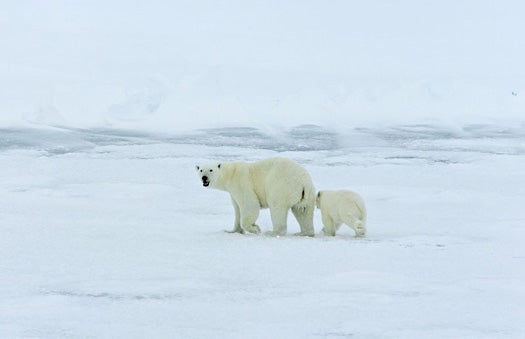 “One beaten man is worth two unbeaten men.” This is not the reasoning Prime Minister Vladimir Putin gave to explain why Russia is green-lighting a dicey project to drill for undersea oil in the forbidding Arctic Ocean. It’s the justification he gave for Russia’s choice of partner in the projects: BP.

Last month, BP and Russian state-owned energy company Rosneft signed an Arctic exploration deal to develop prospective offshore oil reserves in what is arguably the most hostile drilling environment in the world. The Arctic has long been thought to harbor vast reserves–the US Geological Survey thinks one-fifth of the world’s undiscovered, recoverable supplies are tucked away there. But tapping it is difficult, and the prospect of a spill there somewhat horrifying.

First, the Arctic is a perilous place to drill. Icebergs, gale-force winds, icy temperatures, dense fog–all of these things add up to a potential mine field for drilling operations. All this is compounded by the fact that the Arctic is plunged into darkness for half of the year (just imagine trying to coordinate a Gulf-style cleanup effort in the dark). Ice cover during eight months of the year could block relief ships in case of a disaster, like a blowout or a rig fire.

The Arctic ecosystem is already so fragile, its food chain so delicate, that an unchecked gusher would spell disaster. Which brings us back to Putin, BP, and the hunt for riches in the waters north of Russia’s long Arctic coastline. Russia likes BP because, by Putin’s reasoning, the company has experience with disaster and a serious interest in not repeating its mistakes. It’s unclear if BP having recent experience with ecological disaster means that Russia is expecting to need that kind of experience on hand.

In any case Russia and BP are pressing on, and now that the genie is out of the bottle other Western companies are itching for their shot at Arctic riches. Those include Shell, who recently postponed plans to drill off Alaska’s Arctic coast after some U.S. lawmakers and regulators introduced obstacles to the drilling. We’d be surprised to see similar local opposition to a Parliament- and Putin-approved plan in the Russian Arctic.