We’re going to go ahead and write this one because it’s all kinds of interesting, but know that we are... 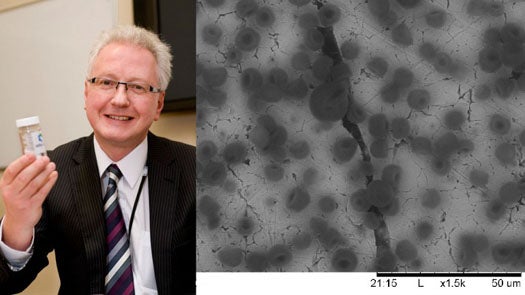 We’re going to go ahead and write this one because it’s all kinds of interesting, but know that we are doing so with all kinds of skepticism, fair readers. Because anytime anyone claims to have created inexpensive synthetic fuel that will burn in conventional automobile engines with no carbon emissions, you simply have to be on your guard. Nonetheless, UK-based Cella Energy claims to have done exactly that by devising a hydrogen-based synthetic fuel that could replace gasoline in cars.

The technology—reportedly incubated at the Rutherford Appleton Laboratory near Oxford in a top secret four-year program—is based on complex hydrides that are highly unstable, usually degrading rapidly in air. Put simply, the company claims it has found a nanotech-driven method that encapsulates hydrogen at usable concentrations in micro-capsules, allowing it to be handled and burned in conventional engines without the need to store it in dangerous high-pressure tanks or super-cooled environments. From Cella’s website:

Cella Energy have developed a method using a low-cost process called coaxial electrospinning or electrospraying that can trap a complex chemical hydride inside a nano-porous polymer that speeds up the kinetics of hydrogen desorption, reduces the temperature at which the desorption occurs and filters out many if not all of the damaging chemicals. It also protects the hydrides from oxygen and water, making it possible to handle it in air.

This means that basically the micro-capsules are stabilized hydrogen that moves like a fluid, meaning you could pump it into your automobile as-is, with no engine or fuel injection conversion—though Cella readily admits that preliminary deployment of their product would likely be as a fuel-additive that helps to cut down on carbon emissions.

Moreover, Gizmag writes that the fuel could be produced at a fixed price of about $1.50 per gallon, a price that would be stable and immune to the whims of OPEC or anyone else (except Cella, it seems). We’re not exactly sure where to attribute that dollar value, though Gizmag did interview the company’s CEO.

So: $1.50 per gallon carbon-free nano-liquid hydrogen fuel that burns in existing engines. Sound too good to be true? In theory the science makes sense assuming the “electrospinning” process works as well as Cella claims it does. But until those hydrogen micro-beads are powering our flying cars, we remain optimistically skeptical.