Large scale farming is a dirty business, but Taiwan’s environmental authorities have come up with a novel way to clean... 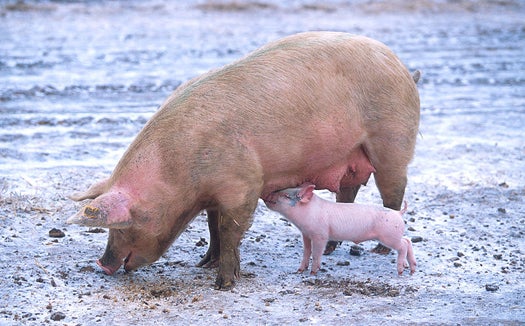 Large scale farming is a dirty business, but Taiwan’s environmental authorities have come up with a novel way to clean up it’s six-million-swine pig farming industry: a href=”http://green.yahoo.com/news/afp/20110105/od_afp/taiwananimalspollutionfarmoffbeat.html//”>potty train the pork. The Environmental Protection Administration has pledged to increase the number of toilet trained pigs in that country after one breeder successfully reduced the amount of waste water on his 10,000-pig operation by 80 percent by teaching his pigs to use the toilet.

Starting in 2009, one southern Taiwanese pig farmer began smearing special “toilet” areas on his farm with excrement and urine to attract the pigs, cajoling them into doing their business in areas where the waste can be contained (waste from farms is among the primary water pollution complaints received by Taiwan’s EPA, and the farmer was trying to avoid costly fines). The effort was such a success that the EPA recently conducted a study on the technique and plans to adopt it across the island.

The effort didn’t just cut the amount of waste water at the farm to 20 percent of previous levels, but also made the farm a cleaner and less odorous operation, boosted fertility y 20 percent, and reduced illness among the animals. The farmer who piloted the initiative told local media that he thinks he collects up to 95 percent of all pig waste produced, rather than letting it slip into nearby rivers.