Researchers at Harvard have figured out how to manipulate the actions of nematode worms sans wires or electrodes, opening the... 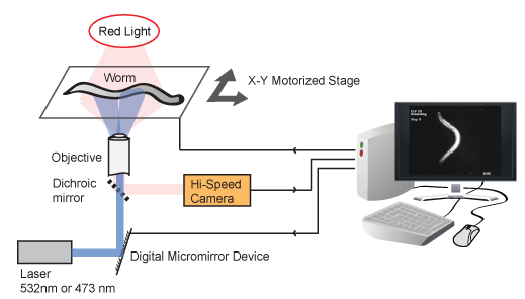 Researchers at Harvard have figured out how to manipulate the actions of nematode worms sans wires or electrodes, opening the door to a better understanding of how just a few neurons can influence behavior in animals. Scientists at the university’s Center for Brain Science have successfully taken over the nervous systems of the tiny nematode C. elegans using nothing but laser light.

The system, known as CoLBeRT for Controlling Locomotion and Behavior in Real-Time (and named for comedian Stephen Colbert, who manipulates audiences with the glow of their TV monitors) takes advantage of nematodes that express a gene for particular light-sensitive ion channel proteins that are similar to proteins found in the human eye. The system then requires the nematodes to be genetically modified to respond to certain commands, a process that’s relatively simple as C. elegans has only 302 neurons.

Each of these genetically modified neurons is associated with a certain behavior, like moving forward or backward or even reproducing. The light-sensitive proteins make those neurons sensitive to different colors of light, allowing CoLBeRT to stimulate or inhibit those neurons with lasers exhibiting different wavelengths.

While manipulating tiny worms may not seem like such a huge deal, the researchers are more or less showing a means of wirelessly taking control of another animals nervous system, granting them control over its behavior (yes, just like in The Naked Gun). Repeating the results in an organism with a nervous system as complex as a human’s would be a far greater trick—humans have 100 billion neurons to the nematodes’ 302—but the research could teach scientist a lot about where behaviors originate in the brain and how neurocircuitry works.

See it happen in the video below, wherein researchers induce egg-laying using a beam of blue light. The light reaches the proper neurons and stimulates the action at frame 8828, or about 43 seconds in.

Inducing a worm to lay eggs with laser light from Samuel Lab on Vimeo.