Thunderstorms produce beams of antimatter particles that rain into space, NASA scientists said this week, shedding more light on one... 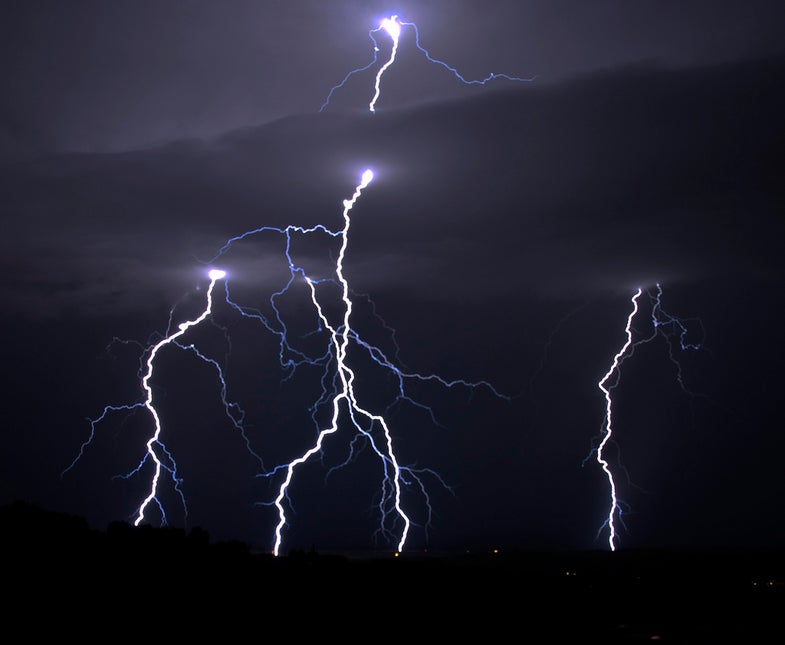 Thunderstorms produce beams of antimatter particles that rain into space, NASA scientists said this week, shedding more light on one of the weirdest Earth physics stories of recent memory.

Terrestrial gamma-ray flashes, which are brief, powerful bursts produced inside thunderstorms, apparently produce high-speed streams of electrons and positrons that are swept up in Earth’s magnetic field. Scientists are still not sure how TGFs work or how lightning enters the equation, however.

NASA’s Fermi Gamma-ray Space Telescope was designed to study high-energy physics in the distant universe by studying gamma radiation. But in 2009, scientists noticed a strange signal in their data — the telltale sign of decaying positrons, which are the antimatter mirror opposites of electrons, in the atmosphere. Fermi noticed 17 such gamma-ray flashes just before, during and immediately after lightning strikes in two separate storms, marking the first time anyone saw positrons in lightning. Their presence meant the normal electric field associated with lightning had somehow reversed, but no one could explain it.

At this week’s meeting of the American Astronomical Society, scientists had some answers. To put it simply: In particularly powerful storms, the electric fields at the top of thunderheads belch a stream of electrons and positrons whose speed approaches that of light as they fly into space. Earth’s magnetic field eventually causes them to turn around, and positrons meet their partners in an embrace of mutual annihilation. This results in a release of energy, which, handily, can be detected in the form of gamma rays.

The NASA team saw this happen several times since 2008, and in most cases, Fermi was orbiting just above the location of the storm. But four times, it was far away from the source of the TGF, yet experienced the results — on Dec. 19, 2009, Fermi was above Egypt when a TGF erupted over Zambia, 2,800 miles to the south. Electrons and positrons rode up the planet’s magnetic field and hit Fermi, according to Joseph Dwyer at the Florida Institute of Technology in Melbourne, Fla.

In each case, thunderstorm-generated positrons flew past Fermi and boomeranged back, colliding with electrons inside the telescope 23 milliseconds later. In a neat twist, this means infinitesimally small parts of Fermi met a spectacular death that the telescope itself detected.

As a result of this research, which was accepted for publication in the journal Geophysical Research Letters, scientists now think all TGFs produce electron/positron beams. (Not all storms produce TGFs, however, so don’t worry.)

Still, next time you’re caught in a thunderstorm, think of the antimatter beams causing miniature annihilations far above your head. Just imagine if your thunder-phobic dog knew about that.