Sterilization is hands down one of the most important technologies ever developed by mankind, but though we’ve known how to... 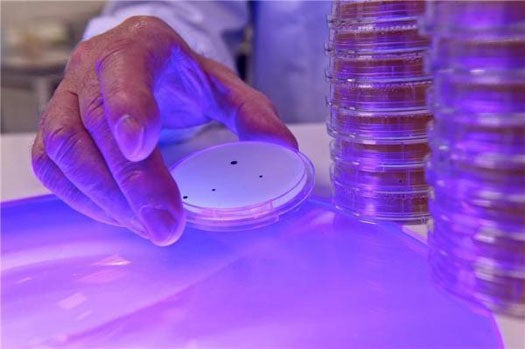 Sterilization is hands down one of the most important technologies ever developed by mankind, but though we’ve known how to do battle with bacterial pathogens in places like the operating room for decades, superbugs like MRSA and Clostridium difficile persist in hospital environments, often causing serious medical complications. But now, researchers at the University of Strathclyde in Glasgow have devised a novel means to drive dangerous pathogens to cell suicide by simply bathing them in a pleasant violet light.

Light-based sterilization is nothing new – ultraviolet light can do a number on pathogens, though it also does damage to humans – but the new method uses a narrow spectrum of visible, harmless light wavelengths known as HINS (High Intensity, Narrow Spectrum) light to do the trick. HINS light excites molecules within bacteria such that they produce a chemically lethal response, in essence pushing bacteria to kill themselves. But while it drives bacteria to cell suicide, it’s harmless to humans and therefore can be incorporated into existing lighting systems in clinical environments to provide continuous sterilization of surfaces and air.

Continuous sterilization, of course, keeps infectious bacterial pathogens from spreading around places like hospital wards, where immune systems are low and the chances of infection are high.

And what of the violet hue? Some might find it a nice ambient addition to the usual bright-white aura of the average operating theater. But for the sake of consistency the team has also figured out how to integrate the HINS light with a combination of LED technologies to produce a warm white light that can be used alongside the usual hospital lighting scheme.

[University of Strathclyde via Smart Planet]