On a rural spread of acreage in South Carolina, insurance companies are looking to cover themselves against losses by knocking... 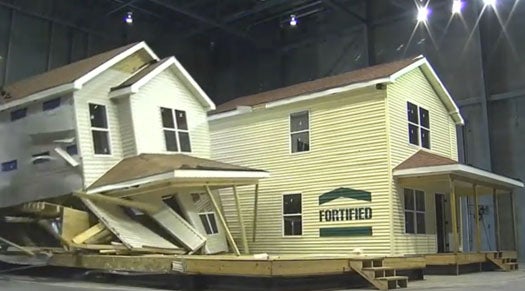 On a rural spread of acreage in South Carolina, insurance companies are looking to cover themselves against losses by knocking down houses. That might sound counterintuitive, but from an engineering standpoint it makes perfect sense. The industry-funded Institute for Business & Home Safety yesterday opened a $40 million, 2,300-square-foot disaster lab yesterday that is among the best in the world, with the ability to subject entire homes to tornado-strength winds or Category 3 hurricanes.

The idea is to put standard construction practices and building codes to the test, creating real-world catastrophes within the confines of the facility. One wall contains 105 giant fans that can simulate extreme winds (they cranked gusts up to 96 miles per hour yesterday), and a 750,000-gallon water tank can introduce water to that mix, simulating tropical storm and hurricane conditions.

For such a large, powerful scientific instrument, the science that will take place here is surprisingly simple. Build two houses to different standards and set them side-by-side in the hangar-like space. Flip the switch. See which one is still standing post-tempest. A large hurricane simulation costs about $100,000 to conduct, but given the fact that a Category 3 storm can render damages in the tens or even hundreds of millions, it’s a small price to pay to make sure it knows exactly how sturdy the buildings that insurers cover. Call it insurance for the insurers, who together hold policies on $9 trillion worth of property exposed to hurricane risk alone.

And how better to inaugurate a giant destroyer of buildings than by destroying some buildings? The IBHS fired up its facility for media yesterday, putting a conventional house next to one fortified with about $5,000 extra dollars worth of improvements. In 96-mph winds, the conventional house was ripped from its foundation and smashed in just minutes. But you don’t want to read about it. Witness the destruction below.