At the heart of M87, the Virgo A galaxy, is one of the biggest black holes ever seen — about... 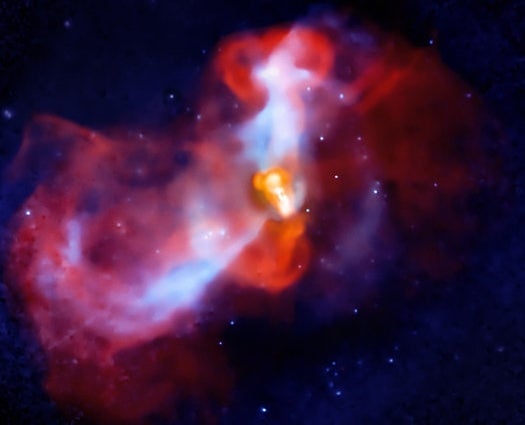 At the heart of M87, the Virgo A galaxy, is one of the biggest black holes ever seen — about 6 billion times more massive than the sun. Scientists working with the Chandra X-ray telescope and the Very Large Array have compiled this nice new image of its insatiable appetite in action.

As matter accretes toward the black hole’s center, tidal forces and other phenomena ejects superheated material into space, which makes the black hole a major source of radio waves.

The red areas indicate radio wavelengths observed at the VLA. The hot gas also emits X-rays, which are indicated here in blue, as observed by the orbiting Chandra Observatory.

M87’s brightness and loudness, as it were, make it a prime target for professional and amateur astronomers.

Bad Astronomer Phil Plait has a nice description of some of the forces at work here. But we think this is the prettiest black-hole belch we’ve seen in a while.