A new generation of e-nose uses a DNA scaffolding and molecular fluorescence to distinguish among various vapors, in a breakthrough... 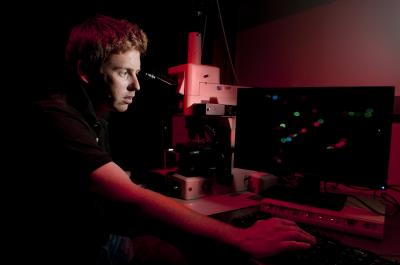 A new generation of e-nose uses a DNA scaffolding and molecular fluorescence to distinguish among various vapors, in a breakthrough that could make electronic sniffers more powerful and simpler to produce, according to researchers at Stanford University.

The method could conceivably detect anything from spoiled milk to explosives, the researchers say — a major advancement over existing e-noses, which search for only a couple of specific molecules.

Florent Samain displays a fluorescence microscope image showing how the fluorescent sensors change color in the presence of organic vapors.

The e-nose involves attaching fluorescent compounds onto strands of DNA molecules, which then change color in the presence of certain substances. Stanford chemistry professor Eric Kool says one sensor could tell the difference between four organic vapors, because it would change colors with each one.

To make the sensors, the team took one side of a DNA double helix and replaced its four bases with fluorescent base-pair substitutes, according to a Stanford news release. Unhindered by the second helix backbone, the stacked bases protrude from the DNA strand like whiskers, ready to sense organic vapors.

The team could choose among seven replacement bases, so they used DNA synthesis technology to come up with a library of all the 2,401 ways they could combine into a string of four units. Then they tested all those combinations to see how they responded to various substances, including industrial solvent, aquatic herbicide and explosive-preparation materials.

Multiple sensor arrangements demonstrated a marked fluorescent response when exposed to the test substances, Kool says. DNA base pairs communicate electronically, so rearranging the synthetic bases resulted in different responses to the same stimuli, he added.

Next up is making a sensor array that can detect a wide range of substances, according to Kool. “Because we get such a diversity of responses — even one molecule can tell the difference among four different things — we could have a set of 10 or 20, or 100 sensors, which would give a vast array of responses to many different kinds of molecules.”

The study was published online this week in the German journal Angewandte Chemie (Applied Chemistry).