The DOE released its 2009 Wind Technologies Market Report yesterday, and the results are a mixed bag of highs and... 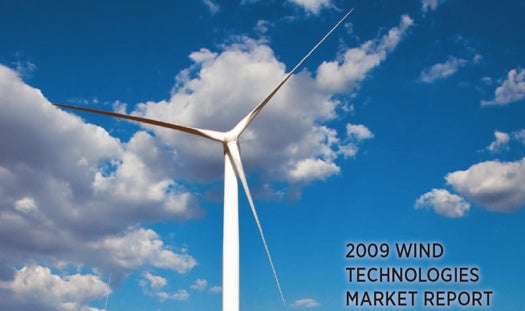 The DOE released its 2009 Wind Technologies Market Report yesterday, and the results are a mixed bag of highs and lows for the U.S. Americans added 10 gigawatts of wind capacity last year, 40% more than in 2009. But alas, the U.S. is the world’s wind power leader no more; China outpaced the U.S. in new wind capacity, stealing away a mantle America had owned for four years.

Last year, the U.S. captured 26% of the world’s new additions in wind capacity, a full 10% less than China. But that’s really no reason for America to get down on its renewable energy ambitions. The U.S. still owns the most cumulative wind capacity, and our lead in that category is substantial at 35,000 megawatts. China has 25,853 cumulative megawatts of wind capacity in service, just edging out Germany’s 25,813 megawatts.

Further, wind power accounted for 39% of all new power generating capacity in the U.S. last year. That’s down a bit from 2008, but far exceeds the amount of wind American states added in 2004 through 2007 (in 2008 wind energy made up 44% of new energy capacity, but the financial crisis took a bit out our sails on the new investment front in 2009). Texas led the way, installing 2,292 megawatts alone.

The point is, wind power installation is trending ever-upward even as the financial crisis cut investment in some new energy ventures in 2009. Both the U.S. and China are exploring offshore wind options – the U.S. recently approved it’s first offshore wind farm – which could rapidly expand both nation’s capacities to install new wind infrastructure. As for China’s overtaking the States in new installations, that’s nothing to lose face over. As two of the world’s largest producers of greenhouse gasses and the two global powers the world is looking to for energy guidance in the new century, America and China should be fostering healthy competition when it comes to going green. We’ll get ’em next year. 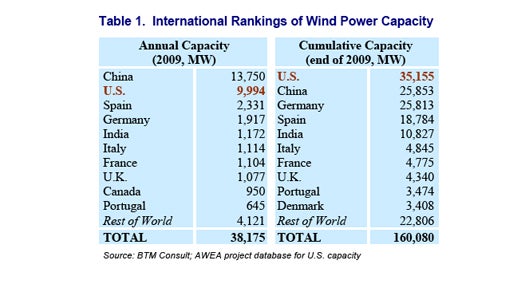 A PDF of the entire report is available here.