NASA’s latest mission doesn’t have anything to do with spacecraft or satellites. The space agency is helping thousands of baby... 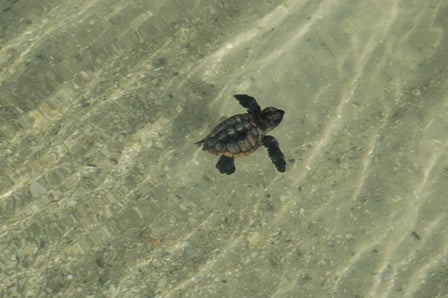 NASA’s latest mission doesn’t have anything to do with spacecraft or satellites. The space agency is helping thousands of baby sea turtles make their successful pilgrimage to the ocean. Biologists are digging up some 700 turtle nests on northern Gulf beaches affected by the BP oil spill, from Panama City to Apalachicola, Florida, and relocating them to NASA’s Kennedy Space Center (KSC) on Florida’s Space Coast.

To simulate the natural environment, the eggs will be buried in damp sand inside Styrofoam coolers and transported via a temperature-controlled truck to KSC. There, they will be held and monitored at an undisclosed facility until they hatch. Once the turtles begin to break free from their shells, they will be moved quickly to nearby beaches to make their trek to the sea, where they feed exclusively along the line of Sargassum seaweed at the edge of the current. Most of the nests are made by the threatened loggerhead sea turtle, but some are possibly from three endangered species — Kemp’s ridley, leatherback, and green sea turtles. Each nest has 100-120 eggs.

Only about one in 1,000 sea turtle hatchlings typically survives to adulthood under the best conditions. Experts say that with oil right off the Gulf Coast, the turtles’ odds of survival there drop to virtually zero. BP’s ongoing Deepwater Horizon oil spill has released hundreds of millions of gallons of oil into the Gulf of Mexico and is considered the largest offshore spill in U.S. history.

The U.S. Fish and Wildlife Service, National Marine Fisheries Service, and the Florida Fish and Wildlife Conservation Commission all played a role in developing the relocation plan. NASA offered to house the turtles until they hatched at its climate-controlled facilities at KSC. Although biologists can’t be certain the sea turtle relocation plan will succeed, they say all of this year’s hatchlings from the northern Gulf of Mexico will be lost if nothing is done.