Researchers have found a novel method for stopping the spread of influenza viruses, a finding that could lead to a... 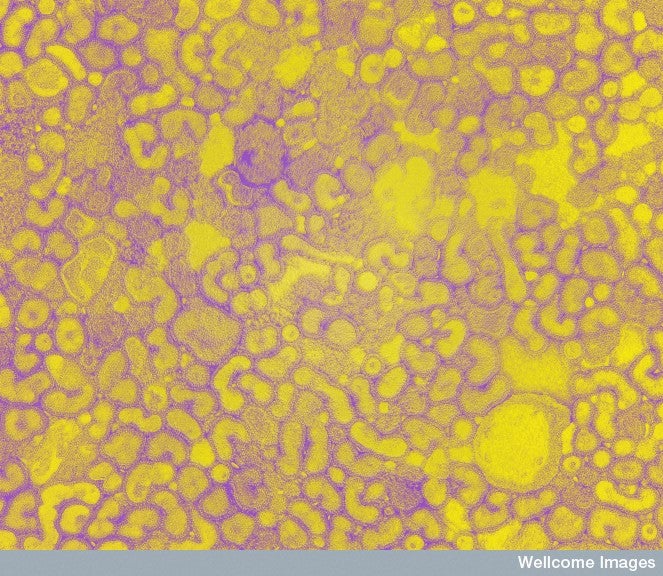 B0005812 Influenza A viruses Credit: R. Dourmashkin. Wellcome Images images@wellcome.ac.uk http://images.wellcome.ac.uk Influenza A (PR8) particles showing the variety of forms the virus can take. The particles are surrounded by spikes consisting of haemagglutinin and neuraminidase proteins (purple) embedded in the viral membrane. The internal helical component appears as a compressed spring-like structure where the particle has been ruptured (centre top). This internal component carries the M protein which specifies the virus type A or B. Both A and B types can cause the epidemic forms of the disease and flu vaccines offer protection to both strains of the virus. It is only type A however that undergoes the large and very rapid changes leading to new viral subtypes known as antigenic shift. Transmission electron micrograph Published: - Copyrighted work available under Creative Commons by-nc-nd 2.0 UK, see http://images.wellcome.ac.uk/indexplus/page/Prices.html. Wellcome Images
SHARE

Researchers have found a novel method for stopping the spread of influenza viruses, a finding that could lead to a universal treatment for flu. The method involves stopping the genetic process by which the virus replicates itself. Researchers can essentially flip a switch that stops RNA in its tracks.

The influenza A virus contains eight individual single-stranded RNA segments, each of which has to make protein as well as new segments, in processes called transcription and replication. The multitasking strands must prioritize their work, so they must start with transcription and move on to replication. Researchers at Mount Sinai School of Medicine in New York figured out how to prevent RNA from starting the replication process. Their results were published June 1 online in the Proceedings of the National Academy of Sciences.

Using a novel process called deep sequencing, the team found a small viral RNA segment, or svRNA, that is integral to the change. Inhibiting the svRNA from doing its work stymies replication, and therefore slows the spread of the virus.

Even better, influenza A shares this trait with its viral cousins, influenza B and C, meaning the svRNA switch can be used to stop all kinds of flu — even the H1N1 flu. As an added bonus, if the virus is prevented from replicating, it stays in transcription mode and produces more proteins. This helps the body’s immune system build up its defenses, according to Benjamin tenOever, an assistant microbiology professor at Mount Sinai and a study author.

The process used to make this discovery is also groundbreaking, the researchers say. The deep sequencing allowed the scientists to obtain millions of small RNAs from cells in an unbiased fashion, according to a Mount Sinai release.

The next step is to find a way to introduce RNA “antagonists” to inhibit the svRNA’s switch function, tenOever says. That’s still a long way off, but the knowledge that RNA can be switched off means that a universal flu treatment is a possibility.