Along with its main mission of scientific research, NASA’s Cassini orbiter is one heck of a photographer. NASA just released... 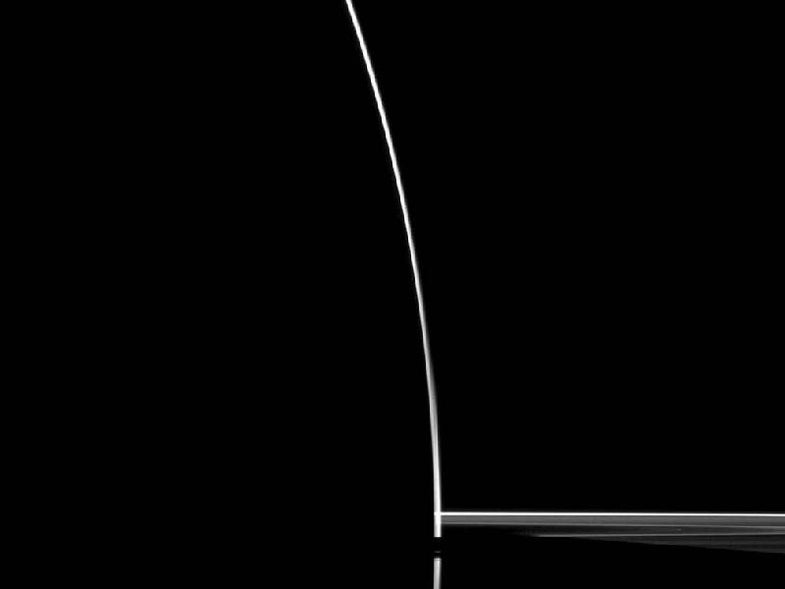 This spectacular image of Saturn, released June 7 by NASA, shows sunlight scattered through the uppermost part of the planet's atmosphere. The sun is eclipsed in this photo, but enough light permeates the atmosphere to reach Cassini's cameras. The Cassini orbiter snapped this photo Feb. 13, 2010. NASA
SHARE

Along with its main mission of scientific research, NASA’s Cassini orbiter is one heck of a photographer.

NASA just released the striking image above, which shows the upper layers of Saturn’s atmosphere illuminated by the eclipsed Sun. And that’s far from the the only modernist photo Cassini has snapped over the years.

The spacecraft has been swinging around Saturn and its moons for six years now (its arrival anniversary is June 30), returning interesting and sometimes surprising data about the extreme environments found at the sixth planet.

All the while, it has been sending back beautiful, sometimes surreal portraits of the Bringer of Old Age.

Check out our gallery of Cassini’s colorful images. 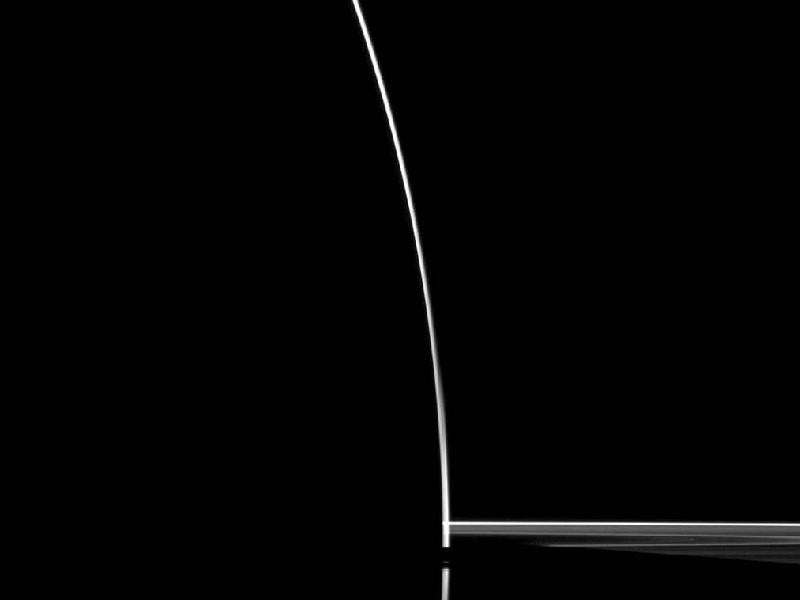 This spectacular image of Saturn, released June 7 by NASA, shows sunlight scattered through the uppermost part of the planet’s atmosphere. The sun is eclipsed in this photo, but enough light permeates the atmosphere to reach Cassini’s cameras. The Cassini orbiter snapped this photo Feb. 13, 2010.

Cassini and the Giant Peach

Saturn looks like a giant pastel peach in this mosaic image from the Cassini orbiter, snapped May 4, 2009. The planet’s rings rings cast a dramatic shadow separating the blues and greens of the northern hemisphere from the creamy pastels coloring the southern hemisphere. The mosaic combines 6 images –2 each of red, green and blue spectral filters — to create this natural color view. 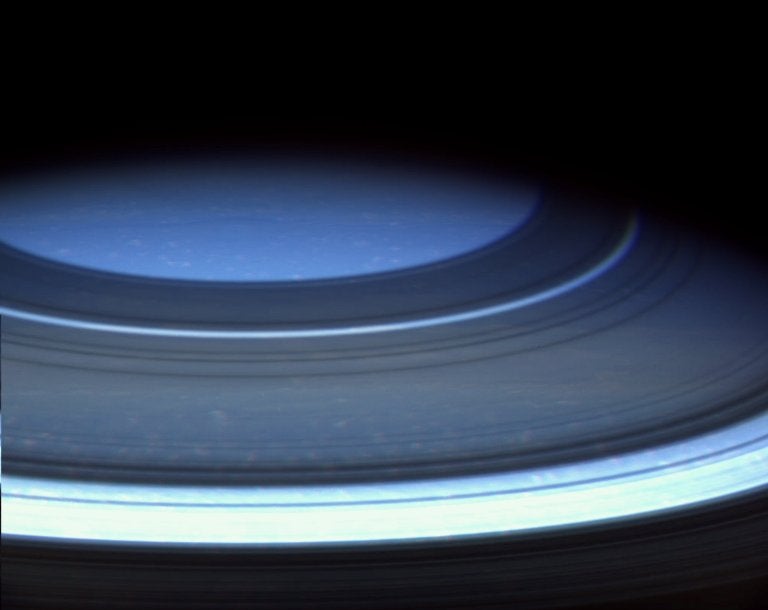 Saturn’s northern hemisphere is a serene blue, as seen in this natural color image from Cassini, taken Dec. 14, 2004. Northern Saturn is relatively cloud-free, so light rays travel a longer path through the atmosphere. Scattered light makes the sky blue. Scientists think the northern hemisphere is cloud-free because it’s colder, thanks to ring-cast shadows. 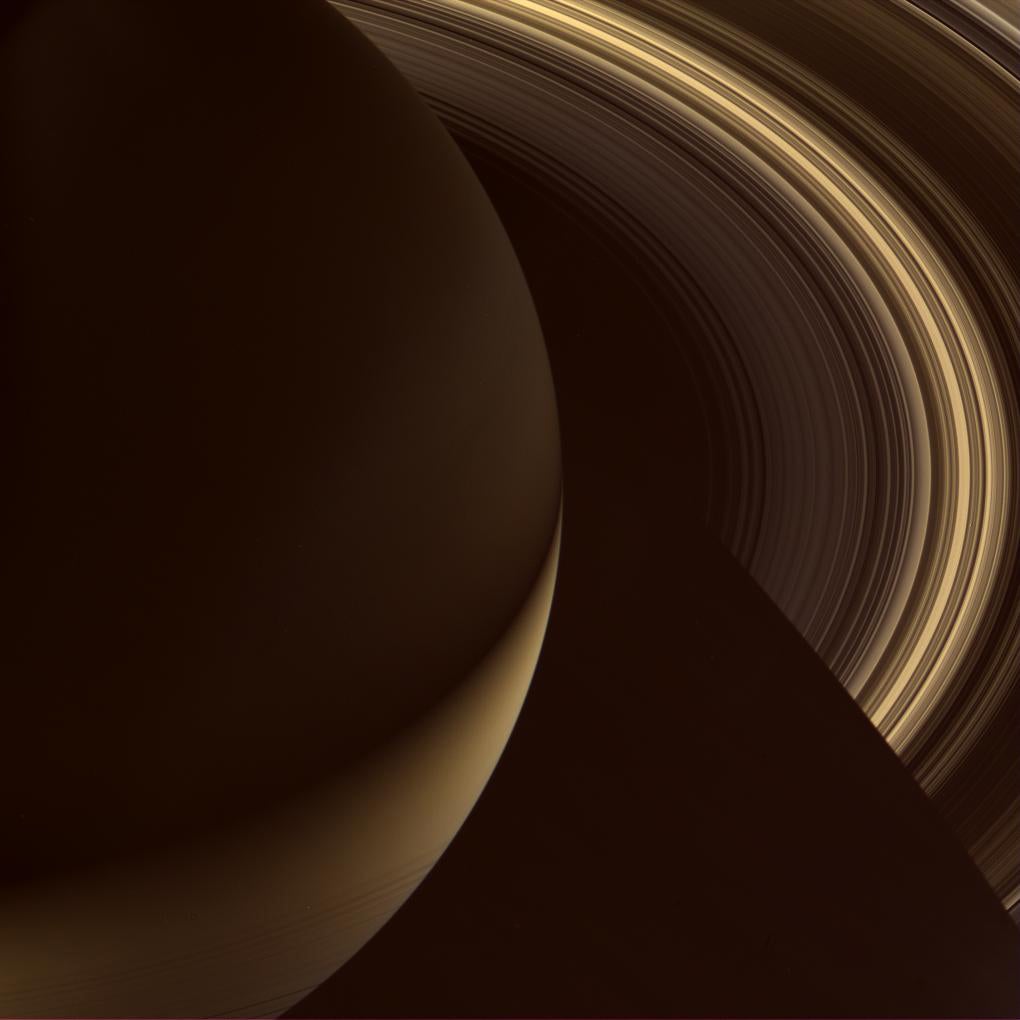 In this image from September 2006, Cassini looks at Saturn’s night side. The southern hemisphere is lit by sunlight reflecting off the rings. The B and C rings look golden because of the increased light scatter, brought on by the high phase angle, according to NASA. The innermost rings are seen silhouetted against Saturn’s southern hemisphere before disappearing into darkness. 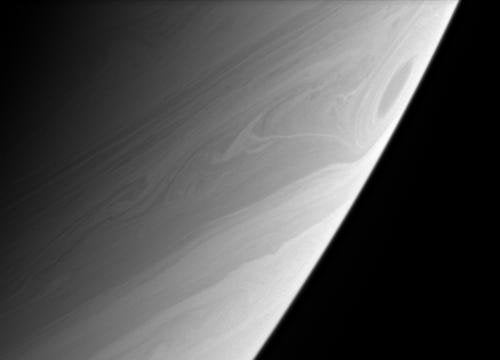 A vortex rolls through Saturn’s southern latitudes, swirling Jupiter-esque contours into the clouds. Scientists believe Saturn’s uppermost clouds are made of ammonia ice, followed by ammonium hydrosulfide and water clouds at lower levels. This photo was taken May 13, 2006, when Cassini was about 1.8 million miles from Saturn. 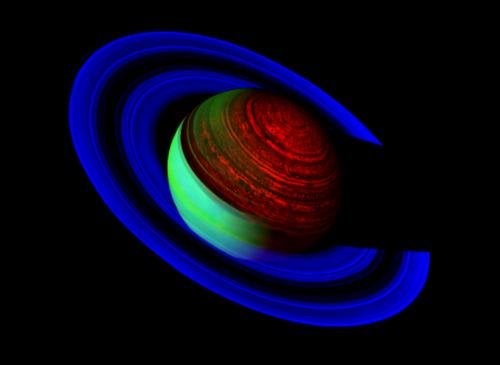 This bizarre false-color mosaic captures Saturn in daytime and nighttime conditions. It was created from 25 images taken by Cassini’s visual and infrared mapping spectrometer. Electric blues and greens represent light at different wavelengths. On the image’s right side — the night side — the reddish hue represents Saturn’s own heat. The mosaic, taken over 13 hours on Feb. 24, 2007, was taken as Cassini flew over the unlit side of Saturn’s rings. 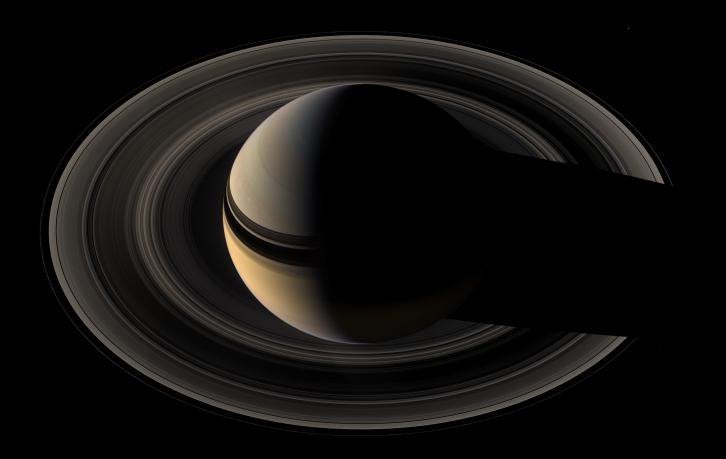 This natural color mosaic was acquired as Cassini soared 39 degrees above the unlit side of Saturn’s rings. NASA explains that from this angle, very little light makes its way through the rings to be scattered in Cassini’s direction, making the rings appear somewhat dark compared to the reflective planet. This picture was taken May 9, 2007.
astronomy
Cassini
cassini mission
images
imaging