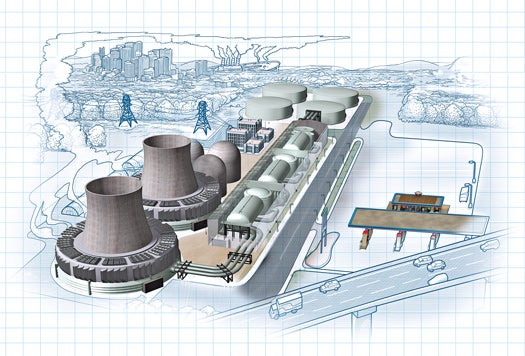 Into the category of things that sound too good to be true, add Green Freedom. If the scientists behind this federally funded proposal are correct, we’ll be able to continue driving gas-powered cars and flying in gas-powered aircraft indefinitely, in a closed, net-zero-emissions system that won’t contribute to global warming.

An outgrowth of research into cleaner fuels for the U.S. Air Force, Green Freedom proposes a network of nuclear power plants that would capture carbon dioxide from the atmosphere and chemically convert it into gasoline, all with existing technologies. “We’re not taking anything out of the ground, not making things any worse, not using fossil fuel to create fuel,” explains F. Jeffrey Martin, the Los Alamos National Laboratory nuclear scientist behind the proposal. “The whole thing is carbon-neutral.”

By that, Martin means that the system releases only as much carbon as it captures. Since mobile sources, such as vehicles and planes, account for half of all carbon emissions, his recycling program, if rolled out nationwide, could dramatically reduce the strain on the environment and allow sequestration technologies to start cleaning up the atmosphere instead of just slowing the rate at which we damage it.

The catch? To collect and process enough CO2 to fuel the entire country, would require building 500 new nuclear power plants, each with the ability to produce 714,000 gallons of gas. Today there are only 104 nuclear plants, and those would need to be retrofitted. “We haven’t built a nuclear power plant in the U.S. in 30 years,” Martin says, “so we’ll have to get through that transition first.” In the meantime, he believes, we could offset our annual declines in domestic gas production with just nine new plants.

The key is turning nuclear cooling towers into giant CO2 suckers. Normally, the towers inhale air to cool hot water from the reactors. With Green Freedom, they would pass the air over a solution of potassium carbonate added to the cooling liquid. “Potassium carbonate is like a vacuum for CO2,” Martin explains. To extract the CO2 for recycling, he proposes an energy-efficient electrochemical process that produces only hydrogen as a by-product.

With earmarked funds secured by Texas senator Kay Bailey Hutchison, Green Freedom has plans to build a demonstration facility at a nuclear power plant set for construction in West Texas. If all goes as planned, the plant will begin producing power and gas in 2018, serving as a model for the rest of the country.

architecture
designs
future of cities
future of the environment
july 2010