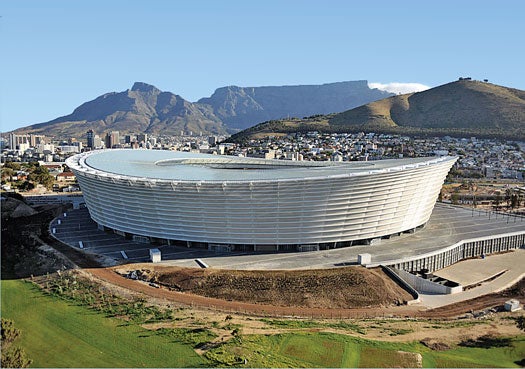 When the World Cup kicks off in South Africa this month, the 69,070 soccer fans inside the new Cape Town Stadium will scream at the top of their lungs to urge on their favorite team. But thanks to some clever engineering, the people living nearby will hear hardly a peep.

The open-air stadium sits in Cape Town’s tony Green Point neighborhood, where residents had raised concerns about crowd noise. To keep fans’ cheers to a minimum outside the building, a design team from the German engineering firm Schlaich Bergermann topped the structure with the world’s largest glass ceiling. The 398,265-square-foot roof consists of 9,000 half-inch-thick glass panels, arranged in a ring above the stands, and a Teflon and fiberglass mesh suspended below the glass. Together they reflect the crowd’s roar back onto the field and stands (potentially handing an advantage to the team with the loudest cheering section) to prevent noise from escaping through the roof’s central hole. 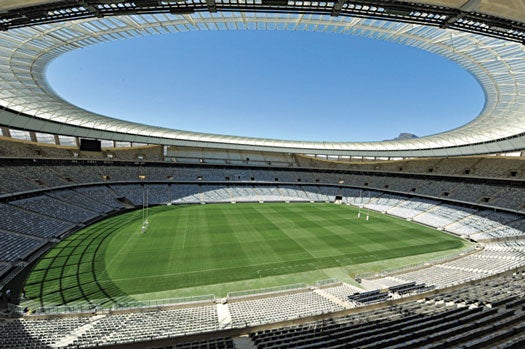 The roof will also protect fans from the Cape’s notoriously fickle weather. Locals joke that you can experience all four seasons in a day because of wind kicked up by the nearby convergence of two major ocean currents: warm from the Indian Ocean and cold from the Atlantic. Combined with turbulent winds spilling off the city’s Table Mountain, gusts can reach more than 50 miles an hour. The roof’s concave shape deflects the wind and redirects it around the stadium. Let the games begin.