We’ve landed the robots, puttered about on the planet’s surface, and, at long last, found the water. Now, NASA is... 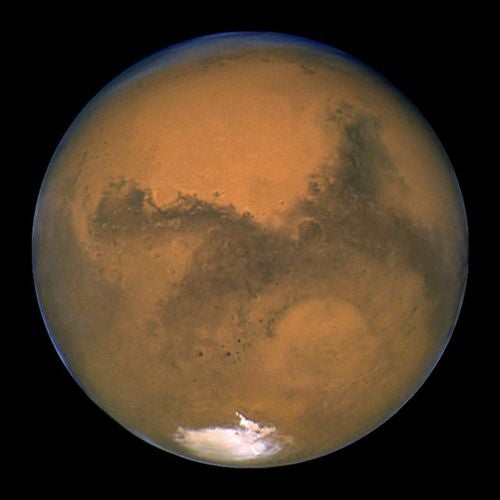 We’ve landed the robots, puttered about on the planet’s surface, and, at long last, found the water. Now, NASA is getting back to basics on Mars with a plan to once again search for signs of life on the Red Planet, a focus that’s been on the back burner since the 1976 Viking missions. But this time, NASA doesn’t want to analyze Mars from Mars. This time the space agency wants to bring samples back home, and has a cleverly orchestrated scheme to do it.

NASA thinks the acquisition and return of Martian rock and soil samples is completely doable, but it’s going to be a costly three-phase process, probably with a price tag totaling some $10 billion. And since the federal government isn’t exactly showering NASA with cash, the agency recently teamed with its European counterpart to map out the details of such a complex mission.

A joint NASA/ESA mission would happen well before NASA’s manned mission to Mars, which is loosely slated for the mid-2030s. It would go down something like this: Two rovers would set off for Mars in 2018, one to drill into the surface, the other to collect surface samples. A few years later, their ride home would set off to pick them up. Again, two spacecraft would be needed, one to head to the surface and one to fall into orbit around Mars. The surface craft would collect the samples and launch them up to the orbiting ship, which would then return make the 50 million mile return trip to Earth.

Sounds easy enough. Even if such a mission — which, we should point out, is a vision rather than a certainty — launched on the timetable described, we wouldn’t see samples on Earth until the mid-2020s. But those samples could tell us quite a lot. Researchers could analyze rocks for the organic compounds and rare chemistry that are the telltale signs of life — tasks that rovers like Spirit and Opportunity are not well equipped to carry out. That means we could have a definitive answer about the possibility of life existing there sooner rather than later.