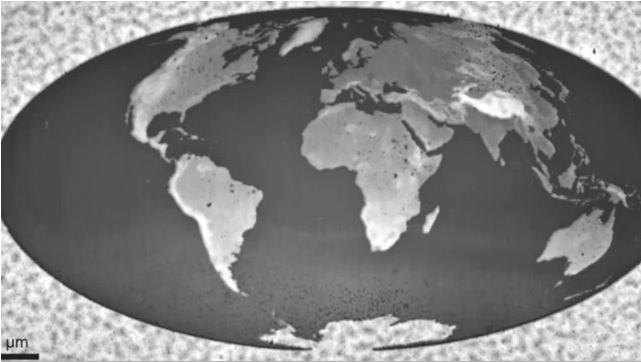 IBM scientists working across three countries have created the smallest-ever 3D map of the world — so tiny that 1,000 maps could fit on a grain of salt.

The map, measuring 22 by 11 micrometers, is scratched out on a polymer surface. Every 8 nanometers corresponds to 1,000 meters of altitude — so Mount Everest would be about 64 nanometers high.

The map is composed of 500,000 pixels, each measuring 20 nanometers square. The patterning process could conceivably be used for nano-scale electronics and medical devices.

The breakthrough was in how the scientists decided to build the map. IBM scientist Urs Duerig says in a company video that his “a-ha” moment was in realizing he could make 3-D shapes by removing material rather than adding to it.

A tiny silicon tip attached to a cantilever is heated as it approaches a polymer substrate. Force and heat chip away at the polymer, yielding the desired shapes. It took two minutes and 23 seconds to build the 3-D map of Earth.

“It’s like the ancient Egyptians chiseled their stuff into stone plates. Here we have the analogue, but on the nano-scale,” he said.

The team also created a scale model of the Matterhorn, well known to Europeans and Disney World visitors. The famous mountain is recreated in molecular glass, reaching 25 nanometers high — a scale of 1 to 5 billion.

The findings were reported in the journals Advanced Materials and Science.