And they cost only three cents each 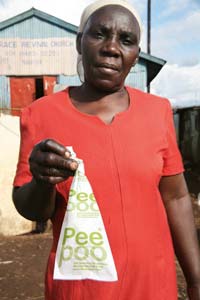 The mismanagement of human waste is a serious health problem for the 2.6 billion people who don’t have regular access to toilets. In fact, in the slums of Kenya, waste management is so haphazard that residents dispose of feces-filled plastic bags by simply flinging the bags away without concern about where they land. And it was discovering those flying sacks of waste that inspired Anders Wilhelmson to invent the PeePoo, a chemically treated toilet bag that sterilizes human waste and converts it to fertilizer, all for only two or three cents.

The secret of the PeePoo lies with the urea coating on the inside of the bag. Once its filled and buried, enzymes in feces naturally breakdown the urea into ammonia and carbonate. This raises the pH in the bag, killing any pathogens. Once the urea decontaminates the waste, the bag biodegrades, and the remaining ammonia fertilizes the soil.

Most importantly, because these problems affect the poorest 40 percent of the world population, the bag is cheap. By producing the bags so inexpensively, Wilhelmson hopes to both help the world and turn a profit. And considering the market for low cost toilets runs into the trillions of dollars, there is certainly profit to be made.

Every year, 1.5 million children die from diarrhea caused by poor sanitation. Through amazingly cheap production and simple design, Wilhemson hopes that the PeePoo won’t just save lives, but allow the people suffering through the problem of waste mismanagement to save those lives themselves.