Those of us who can plug directly into the grid likely don’t think much about where our power comes from,... 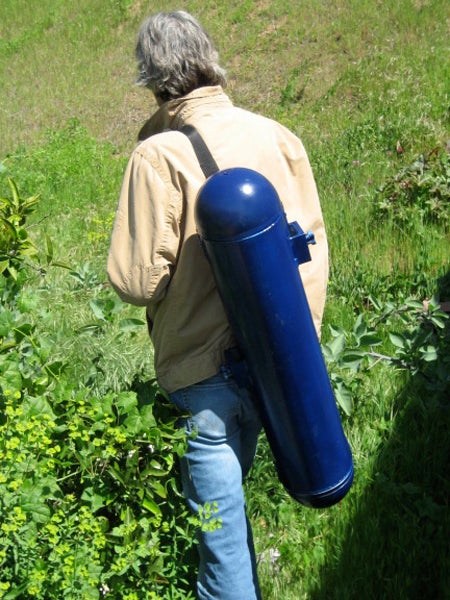 Those of us who can plug directly into the grid likely don’t think much about where our power comes from, but for people living in remote regions of the world or militaries operating far from the nearest three-prong outlet, being able to pack power with you is a priority. With that in mind, California-based Bourne Energy has devised a hydroelectric generator that breaks down to backpack size, making green energy as portable as any standard rucksack.

The BackPack Power Plant collapses into a package only 3 feet long and weighing only 30 pounds, packing power, control, cooling and sensor systems into a cylindrical, fairly lightweight package that slings over the shoulder. When deployed, the rotor blades unfold from the hub, creating a portable electricity source that generates up to 500 watts in optimal conditions (in an ideal spot, the water would be at least four feet deep with a current moving at about 8 feet per second).

To deploy, the user simply digs a trench on either side of the stream, placing a light anchor in each one – a system designed after the mooring systems used on offshore oil rigs. A rope is slung across the stream from which the unfolded BackPack unit hangs into the stream. The unit can be deployed virtually anywhere water runs downhill in significant volumes.

A second, military version of the device weighs less than 25 pounds, can generate 600 watts, and can be bottom mounted to a riverbed so the whole unit is concealed beneath the water. Both military and civilian units can be set up in arrays; the civilian version can put out a full 30 kilowatts when deployed in an array of multiple generators, the military version 20 kilowatts.

The Achilles heel of the BackPack Power Plant: cost. At $3,000 for the civilian version (if history is any indicator, the military rig costs more), it won’t be easy to get them into the hands of those that really need them in underdeveloped parts of the world. But pound for pound, the units put out more power than other portable renewable tech like solar cells and could allow populations that have made it this far without hooking into a conventional power grid to remain unplugged.