Researchers Claim They Can Translate Infant Cries, But is it Just Noise?

Though it’s highly uncertain that they would have anything interesting to say, for some reason we humans agonize over what... 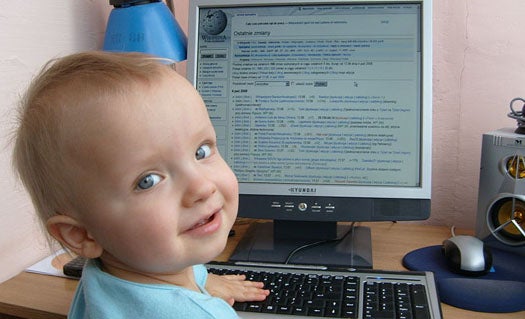 Though it’s highly uncertain that they would have anything interesting to say, for some reason we humans agonize over what our babies might be communicating with all those non-verbal cues. But though we’ve golfed on the moon and harnessed controlled nuclear reactions, the various moans, shrieks and squeals of our infant offspring are still more or less a mystery to us. Now a group of Japanese scientists claims to have cracked the infant code. If you’re not already skeptical, read on.

Over a decade ago a commercial product called Why Cry hit the market, but it more or less simply measures the power and frequency of an infant’s cries, an approach we’re pretty sure was lifted directly from Uncle Herb’s baby translator (you’ll have to reach back to a 1992 episode of the Simpsons for that reference). But the Japanese approach is the first — that we know of, anyhow — to employ computer systems that not only measure the pitch and frequency of an infant’s screams, but employ statistical analysis to establish patterns of crying that, in theory, correlate to different emotions.

Since infants cannot definitively confirm their emotions, researchers worked closely with parents to try to determine infants’ emotional states. But since even the most devoted, sensitive mother can’t be positively certain of her child’s feelings, they experimented with different specialized groups to further narrow their results; for instance, the researchers recorded a group of babies with a painful genetic disorder to establish the difference between pained cries and other types of crying, since that group can be said with relative certainty to all be experiencing a similar kind of pain from time to time. In theory, this should produce similar cries, which the statistics software can isolate and tag as “painful.”

The research was published in the International Journal of Biometrics, lending an added layer of credibility to the findings, as the data will be up for scientific peer review. But is a better breed of baby translator on the way? We’re inclined to think not. While the process developed by the Japanese researchers is no doubt more scientifically grounded than some of the junk science being put out there by purveyors of baby monitoring products, it still seems to be somewhat of an approximation. It doesn’t seem to account for the idea that an infant could be feeling both pain and hunger at the same time, and the method seems to rely on the notion that all babies express themselves in very similar ways, a theory we’re not so sure about.

Besides, do we really want to tamper with this most blessed period in the child-parent relationship? Pretty soon they’ll be able to tell you exactly what they want (and don’t want), and that’s no fun either.