While an all-biofuel economy is a nice notion, we often overlook the fact that biofuel sources, while renewable, are limited... 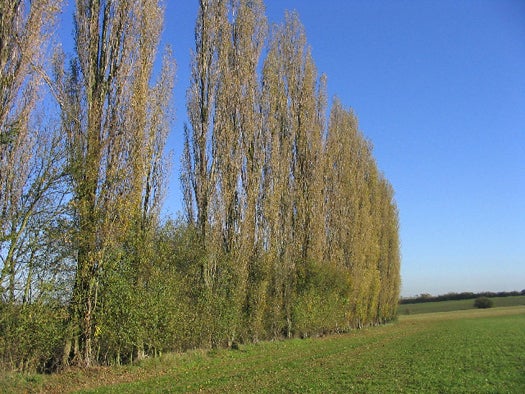 While an all-biofuel economy is a nice notion, we often overlook the fact that biofuel sources, while renewable, are limited in their supplies just like fossil fuels. When you get down to the economics of it, there are still limited biofuel stocks to go around at any given time, and that can create economic pressures that are decidedly undesirable. So a group of Manchester, UK, researchers have identified the specific genes that make plants grow thicker in hopes of juicing trees and other plants species to produce more biomass.

Plants tend to grow from the inside out — picture the rings of a tree — with a solid core of wood in the center and surrounding cells dividing outward over time. The researchers identified the two genes that tell plants to grow outward, with plans to harness that knowledge to push plants to grow thicker faster, providing extra biomass per plant.

Since this genetic coaxing only involves cells in the stalks of plants, it doesn’t interfere with seeds, grains, fruit, etc. That means it could potentially beef up the stalks of food crops like corn without affecting the food crop itself, so it doesn’t engender competition between biomass production and essential food sources.

Like steroids lift baseball players’ performances above and beyond what nature endowed them with, a means to beef up biofuel feedstocks by even ten percent could be the difference between the ball dropping at the warning track or making it over the fence — a home run being analogous to meeting America’s lofty goal of generating a third of all liquid fuel from renewable sources by 2025.

The research team is currently growing poplar trees in the lab to see if they can replicate the initial successes they had beefing up Arabidopsis plants. If it turns out this gene therapy works, look for a larger breed of timber on the horizon.