At Cambridge Alien Conference, Scientists Warn Of An Invisible Earth and Hostile ETs

This week, scientists from around the globe converge on Cambridge University in England to discuss mankind’s relationship with intelligent life... 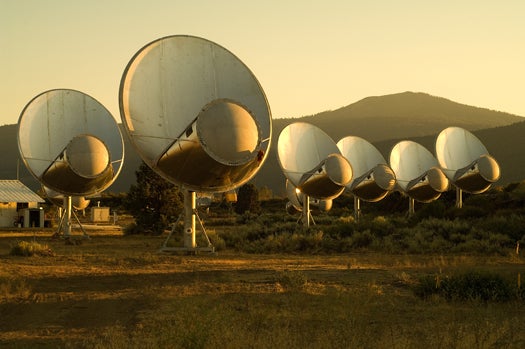 This week, scientists from around the globe converge on Cambridge University in England to discuss mankind’s relationship with intelligent life from beyond the stars. So far, the news is not promising. Already, scientists at the conference have warned that the government has no practical plan to handle first contact, aliens may well be as warlike as us, and the switch from analog to digital signals may make the Earth invisible to aliens anyway.

To start off the proceedings, Frank Drake, the father of SETI, worried that the switch from analog television and radio signals to digital cable and satellite radio would render Earth invisible to aliens looking for other life. Right now, the Earth is surrounded by a 50-light-year thick cloud of radiation, starting with Hitler’s opening address at the 1936 Olympics, and ending with this morning’s broadcast of the Rachael Ray Show. But as more and more people receive their media beamed down to them from digital satellites, not up to them from analog radio towers, that signal slowly fades away, drastically reducing the chance that aliens might detect our tiny blue rock.

But according to Simon Conway Morris, a professor of evolutionary paleobiology at Cambridge University, that might be a good thing. Morris told the conference that emotions are part of the evolution of intelligent thought, so aliens may likely be as greedy, egocentric, and bellicose as humans. Add significantly more advanced technology, and you’ve got a recipe for Independence Day, not Avatar.

And regardless of whether the aliens come in peace, or for our tasty, tasty flesh, we won’t know what to do. Martin Dominik, an astrophysicist at the University of St Andrews in the UK who organized the conference, told the audience that no government has a plan for dealing with first contact. Dominik then advocated that the United Nations develop the plan, since “it’s too important for any one country.”

[The Daily Telegraph, Nature, and The Guardian]