We know how to convert biomass to biodiesel, but the economics of doing so makes many prevailing methods of doing... 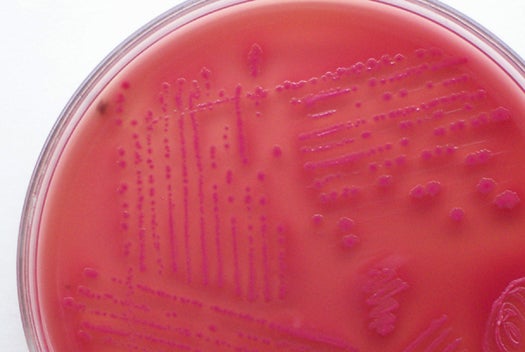 We know how to convert biomass to biodiesel, but the economics of doing so makes many prevailing methods of doing so expensive and unfeasible, keeping an alternative-fueled future just out of reach. But a collaboration between the DOE and private firm LS9 has found a way to coax a strain of E. coli bacteria to produce biodiesel from biomass without further chemical processes, a breakthrough that could pave the way for cheaper, more abundant biofuels.

The sugars dwelling in cellulosic biomass are the target of many alternative fuel schemes, but they can be difficult to get to and even more difficult to process into the fatty acids that we need to make biofuels. E. coli has long been known to synthesize fatty acids efficiently, but natural processes make harvesting those acids particularly difficult. Researchers would like E. coli to biosynthesize indefinitely, but like any organism trying to remain competitive in nature, E. coli doesn’t waste energy manufacturing more fatty acids than it needs to survive.

The team then set about making their E. coli strain produce enzymes called hemicellulases that allow it to ferment hemicellulose — the complex sugar in cellulosic biomass that is the target of pretty much every biomass conversion scheme. Usually these kinds of enzymes — which are not cheap to manufacture — are introduced to cellulosic biomass during a costly processing stage. But the versatile E. coli strain developed by the DOE/LS9 team has the tools to ferment the sugars and convert them to surplus fatty acids all at once, producing raw biofuels directly from the biomass, no extra steps needed.

The cellulosic biomass doesn’t have to come from plants that are consumed by humans or used in animal feedstocks, so the process doesn’t add undue pressure on global food prices, and since the E. coli can ferment and convert the biomass to biofuel all at once the process could greatly improve the economics of biofuel production. All in all, it’s not a bad PR move for a bacterium known most widely for causing food poisoning.