While some viruses attack the lungs, and others the blood, HIV attacks the only system that could put up a... 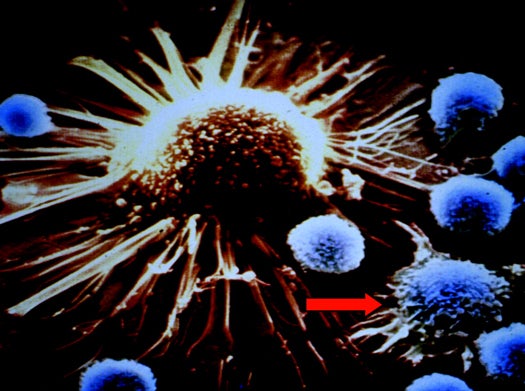 While some viruses attack the lungs, and others the blood, HIV attacks the only system that could put up a fight: the immune system itself. The immune system mounts some defense, but after HIV launches its surprise attack, the body simply can’t produce enough killer T blood cells to take out the virus.

Now, thanks to researchers at UCLA, it’s payback time for the blood cells. A team of scientists have plucked T-cells out of someone infected with HIV, and used them as a template for creating an army of HIV-fighting immune cells out of stem cells. Essentially a genetic vaccine, this technique could be used to copy T-cells designed to fight any virus, opening up the possibility of universal vaccination via stem cell implantation.

Like the plot of an ’80s action movie, the scientists take cells fighting the losing battle against HIV out of the body, and into the safety of the lab. Then, in a sequence presumable utilizing a montage and a Kenny Loggins song, they copy the identifying structures those T-cells use to identify HIV, and implant them in stem cells. In the climactic final showdown, after stem cells develop into HIV-targeting T-cells, the T-cell army is reintroduced into the body in sufficient numbers to overwhelm the virus.

So far, the researchers have only attempted the technique in the lab, and have not tested it on actual people. However, this study serves as proof on concept that stem cells can be trained to hunt down and kill specific viruses. They also need to work out the issue of transplantation, as the immune cell surface proteins are individual-specific, and, without the right engineering, they could be rejected like a transplanted organ.

And since this technique could be applied to any virus, HIV is just the beginning: these guys are looking for a sequel. Don’t worry — they’ll be back.