Phoenix is too hot for planes to take off

High temperatures mean thin air, which makes getting airplanes off the ground tricky 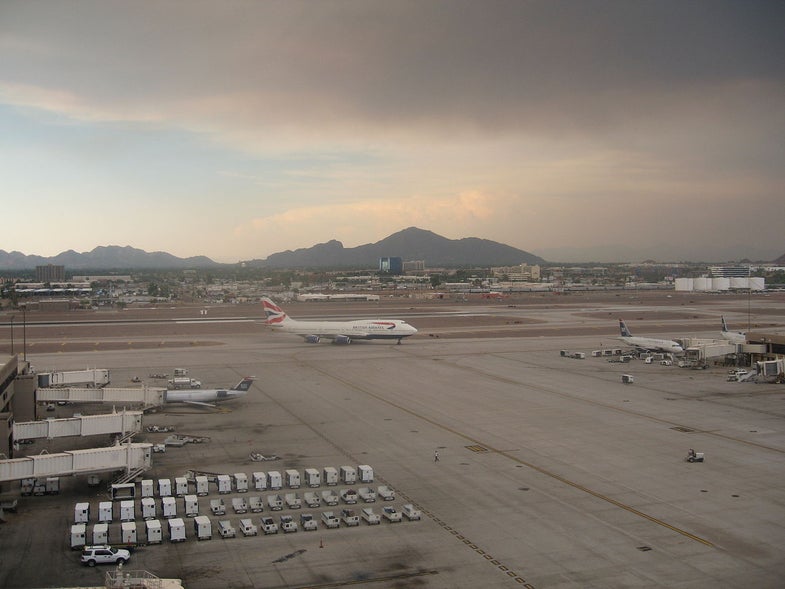 It is almost always hot in Phoenix, but today temperatures are expected to peak at 120 degrees fahrenheit, which has prompted some airlines to cancel flights out of Phoenix Sky Harbor International Airport. The high temperatures alone aren’t necessarily the culprit, but the environmental conditions that come with them can stifle attempts to get airborne. Mix in other variables like the type of plane, the length of the runway, and the conditions on the ground, and we’re left with a complex situation that will only get worse as global temperatures rise.

“It all has to do with air density,” says NOAA Corps Lieutenant Commander Rebecca Waddington, of the Aviation Weather Center in Kansas City, Missouri. “The warmer the air is, the less dense it is. That decrease in density has an adverse effect on aircraft engines, to the point where they just don’t perform as well in higher temperatures.” She explained that the problem isn’t a matter of staying in the air, but rather allowing the engines to produce enough power to achieve the proper take off and landing procedures.

In order to determine if an airplane can safely take off, pilots consult tables that compare its weight, the thrusting power of its engines, and the runway length available.

“In addition to just a runway, you get into climb performance,” says Waddington, “So depending on what airport they’re at, the obstacles, whether it be power or trees or mountains, that departure will require a certain climb gradient, and the warmer the temperature is, the more difficult for the aircraft to achieve that climb gradient.”

Here's why the extreme heat in the Southwest is causing flight issues. pic.twitter.com/YIg2StnkRO

This is likely why most of the flights canceled out of Phoenix are on regional connectors, smaller airplanes with less thrust available. While, for example, Delta Airlines didn’t cancel any of the flights of its Boeing 757s or 737s out of Phoenix today, there were three cancellations from Delta regional affiliates, including two scheduled with smaller Embraer 175s and one on a Bombardier Challenger 870. (As of press time, no Delta flights scheduled after the peak heat window of 3-6 pm were cancelled, regardless of the airplane used.)

Today, the cancellations mean some inconvenience for flyers passing through the valley of the sun. By 2100, three quarters of the planet could face deadly heatwaves, which may well pose challenges for aviation infrastructure as well. Meeting those challenges may requires building longer runways, airplanes requiring greater thrust, or air travel simply becoming inaccessible in the hottest parts of the hottest days.