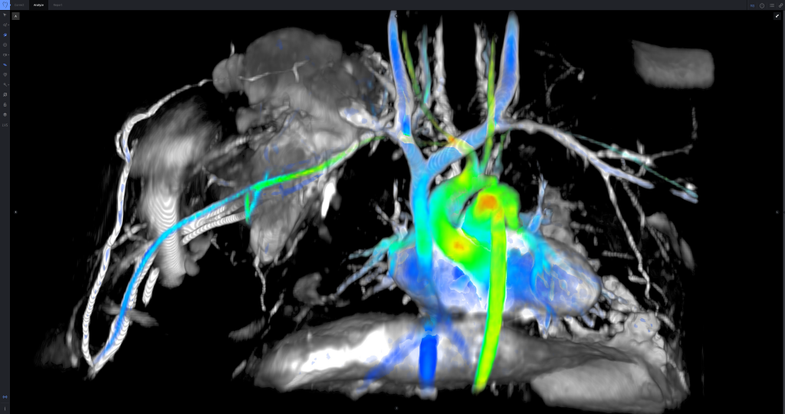 Whether it’s to inspect the damage after a heart attack, diagnose a tumor, or to map out congenital heart defects, doctors often have to take MRI scans of the heart. But to get the image, patients need to stay still in the scanner tube for up to an hour or more, frequently holding their breath. After all that, the image often doesn’t come out clearly, because the heart keeps beating. Now new scanning software called ViosWorks might make conventional heart MRIs a thing of the past.

VisoWorks uses existing MRI devices to create visualizations of the beating heart with higher resolution and more dimensions, and does so in just 10 to 15 minutes, according to a press release from its developer, GE Healthcare. ViosWorks was on display this week at this year’s meeting of the Radiological Society of North America.

While MRI images are static compilations made of “slices” of snapshots, ViosWorks images show how actively blood moves through heart tissues, like a video. The software does this by measuring seven dimensions of the heart—three dimensions of space, the passage of time, and three measures of velocity and direction. The resulting visualization allows doctors to see the heart as it’s beating from whatever angle they desire. That could help them more quickly diagnose a patient’s specific condition and select the proper treatment the first time around, according to its manufacturers.

GE has been working to improve MRI machines for years—in 2013, the company came out with a silent scanner.

This technology isn’t yet commercially available, but, if it’s very high-resolution, it could be used on the brain to monitor the movement of blood and other fluids or to detect problematic areas like tumors or those that were damaged by concussions. For other organs that don’t move, traditional MRIs will likely remain the standard.