Monkeys Are Causing Internet Outages, As Our 404 Page Predicted 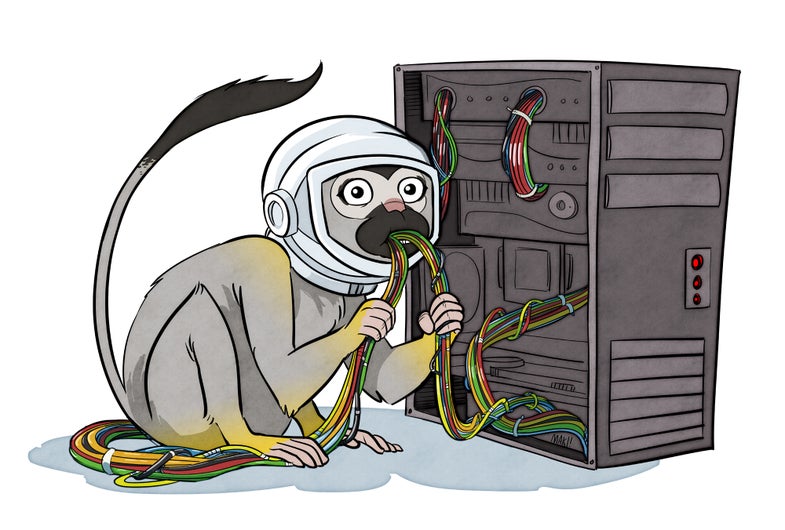 You can harden fiber-optic internet cabling against heat, ice, flooding, mold, and even crushing pressures. But apparently not monkeys. The cable’s freshly extruded plastic casing is too damn alluring to resist an exploratory chewing session.

The Indian government is learning this the hard way, as it installs roughly 435,000 miles of fiber-optic cable over the next few years. Their goal: accommodate another 150 to 175 million internet users while the nation’s population continues to explode.

According to Reuters, the modernization project faces an especially tough time in the holy city of Varanasi. Cables can’t be buried there, so workers simply laid them along the Ganges River. Oops, say writers Rupan Jain Nair and Timmy Wilkes:

They also point out that many of the city’s 2 million inhabitants cherish the monkeys, so trapping them or chasing them away would infuriate residents. But making matters (much) worse for India’s path to high-speed internet access are ancient temples that stand in the way, commonplace electrical shortages, and hot, humid, and rainy weather conditions.

Even if hundreds of mischievous primates are the least of India’s worries, however, we can’t help but say “we told you so.” Had network infrastructure planners ever visited PopSci.com’s 404 page–see above–since we relaunched the site in November 2014, they would have known better than to expose monkeys to such delicious data conduits. (Thanks again to Boxplot blogger and pro cartoonist Maki Naro for his clairvoyant artwork.)