A Task & Purpose investigation shows military officials were slow to act after families living on base reported potential contamination. 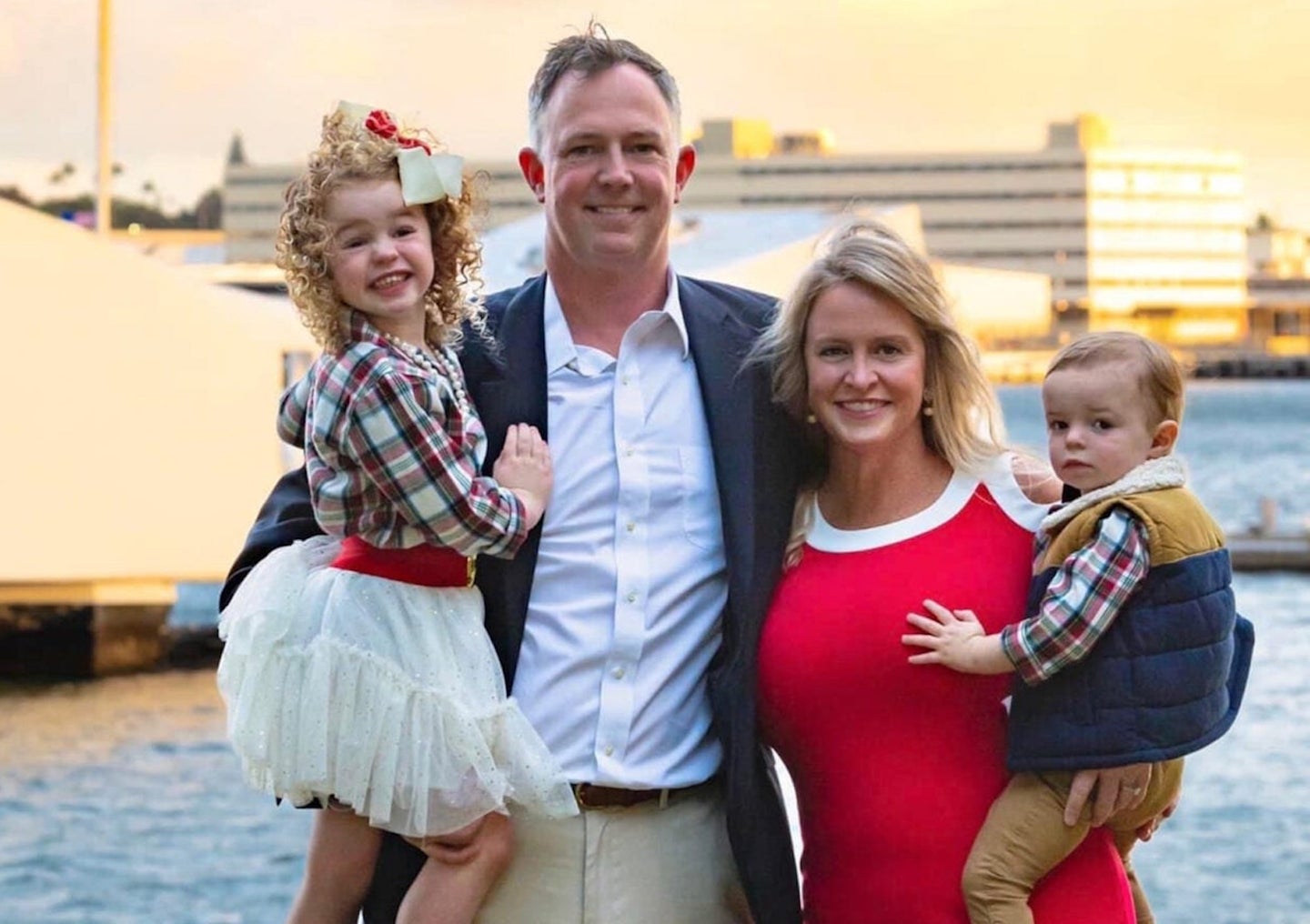 The Feindt family in front of the USS Arizona, on the 80th commemorative anniversary of the attack on Pearl Harbor. Courtesy of Amanda Feindt, via Queen Bee Creatives
SHARE

This story was excerpted from Task & Purpose.

Within a few hours, Amanda’s husband Patrick was taking their little girl to the emergency room at Tripler Army Medical Center in Honolulu, Hawaii. The Feindts, like thousands of other military families, had learned that their water was likely contaminated with jet fuel that leaked from a Navy fuel storage facility weeks before. Amanda and Patrick suspected that their daughter’s illness could be attributed to the water contamination, though they weren’t sure how; they’d been told by the Navy that the water for their Ford Island neighborhood was fine.

The doctor who saw their daughter, however, had other concerns. Even though they were no longer actively drinking the poisoned water, the doctor said they and their children could still be exposed to the chemicals if they were using items like plastic sippy cups or linens that had been washed with the contaminated water. It was the first time anyone had told them that—and all they could think about was their child’s daycare center, which both their children attended daily and had plenty of those items on hand.

As soon as Amanda heard what was happening with her daughter, she contacted the child development center, and explained what the medical staff had told her about the porous materials. The staff at the daycare had not heard about that issue, but said they would try to find an answer. It was the final straw. “I said okay, I am not gambling on my family’s lives anymore.”

While still on the phone with the daycare center, Amanda informed them she was temporarily withdrawing her kids until the water issue was resolved. The same morning, Amanda received another email, this time from her boss. He’d been calling base leaders attempting to get answers for her family; specifically, what were the results of the Navy’s water test of the Ford Island Child Development Center, which her children attended for 10 hours every Monday through Friday?

While her boss told her they may be able to get some answers, he said the Navy wasn’t sure they’d tested the Ford Island Child Development Center yet, calling it “unbelievable.”

Amanda was fed up. She called Navy Capt. Anthony Pecoraro, the chief staff officer for Joint Base Pearl Harbor-Hickam. She brought him up to speed and then asked for the test results. He deflected the question, she said, and referred her to someone else. But they were “past that,” Amanda said. They’d spoken personally before, and she was tired of getting the runaround. If he didn’t have the answers, who would?

He was “really stand-offish,” Amanda said. Though she admitted she was beside herself. Her 4-year-old was sick, and her 1-year-old had been taken to the hospital just two days prior, yet Amanda didn’t have any answers for the doctors. She was crying on the phone to Pecoraro, in “complete hysteria,” and lost “all military bearing.” When another official, Air Force Col. Michael Staples, the deputy commander of Joint Base Pearl Harbor-Hickam, joined the call, Amanda said she repeated her request, only to be told to submit a Freedom of Information Act request for the water test results, a tedious process that usually takes weeks if not months. The Navy did not respond to a request for comment regarding Staples’ remarks.

“I was just a mom at that point, like begging for answers,” said Amanda, who made clear to Task & Purpose she was not speaking on behalf of the Army. “I was so angry, so mad that the Navy felt that they reserved the right to hold on to these answers about my children. My children were in the hospital. Like, how dare they?”

The emergency room visit that Monday was the culmination of weeks of fighting with the Navy to get answers about what her children were exposed to, as the military worked to contain a massive water contamination issue. On multiple occasions, Amanda spoke with base officials or the director of the child development center and asked for the results of water tests and assurances that the Navy was addressing parents’ concerns. Each time, she claimed she was either lied to or given more concerning information that undercut her trust in Navy officials.

This report is based on first-hand accounts, emails about the water crisis between affected service members and military officials, public announcements, official statements, and supported by existing reporting by Task & Purpose and other news sources. Task & Purpose made repeated and detailed inquiries to base officials and Navy personnel named in this report.

In response to detailed questions from Task & Purpose, Navy Lt. Cmdr. Marissa Huhmann said it was “important to note that information provided to our residents, our communities, the public and the media was accurate at the time” it was given.

“The water situation continued to evolve and as it did, we communicated new information as it became available,” Huhmann said.

Although this report focuses on the Feindts and their experience, they are not the only family facing similar problems. The child development center that they use also cares for more than 200 other military children, and many more families around the base and in the surrounding communities have complained of illness and fear of exposure, and voiced concerns with how Navy leaders have handled the situation.

“I volunteered for this, right?” Amanda said. “I signed up, volunteering to serve our country after 9/11 happened. Me. And with that I know comes risk, and I know comes potentially being in harm’s way … but now I’m having to put my kids on a registry? My kids didn’t volunteer for this.

“My kids did not volunteer to be poisoned.”

Read the rest of the Ford Island investigation at Task & Purpose.