Flight of the Jetpack 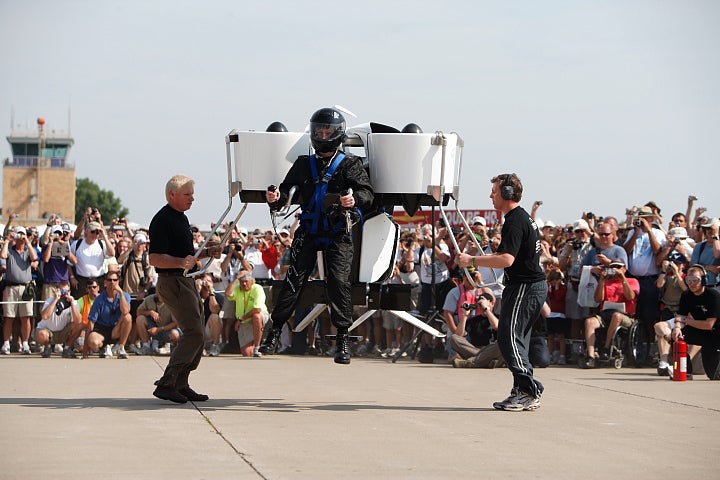 Today marked the public debut of the Martin Jetpack, a ducted-fan-equipped personal flying vehicle that could keep pilots aloft for 30 minutes or more. Inventor Glenn Martin has been working on the jetpack—which isn’t technically a “jet” pack, given the fans—for 27 years, but he has kept it secret until now. Even his son, Harrison, the 16-year-old test pilot, wasn’t allowed to tell his friends that he’d been cruising around the yard back home in Christchurch, New Zealand in a revolutionary flying vehicle. The latest model, which Martin says is the eleventh prototype, features a screaming loud two-stroke engine that powers two ducted fans.

A huge crowd turned out for its debut at the Experimental Aircraft Association’s AirVenture fair in Oshkosh, Wisconsin, and cheered when the Martin Jetpack team unveiled one of the two prototypes on hand. Martin talked of his Jetson-fueled inspiration, and his desire to build something that’s both safe and capable – something that anyone, not just a skilled pilot, could use. “We’ve got something you can strap on and fly around in for 30 seconds,” he said. The total run time of the machine could be as much as 45 minutes, but the team hasn’t run it for more than 40 seconds at a time yet, and they’ve kept it close to the ground, too, for safety reasons. Martin warned the eager crowd that they wouldn’t be showing off much. He said they’ve done figure-8s and more, but that today’s flight would be limited to an extended hover. Though he’s been through ten prototypes, he said, “It’s still a newborn baby.”

But that baby put on a pretty good show. With his father and one of the engineers holding on to the sides, for safety reasons, Harrison cranked up the fans and hovered several feet off the floor for more than 30 seconds. Once the engine shut down, the crowds cheered, and someone yelled, “I want one!”

And although Martin says they’re not done perfecting it, the machine is on sale now. For $100,000, you could have a jetpack of your own.

Check out our video coverage below and check out the gallery. 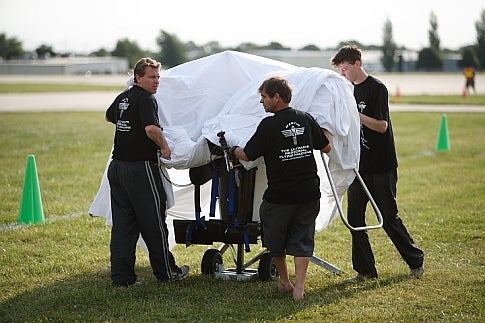