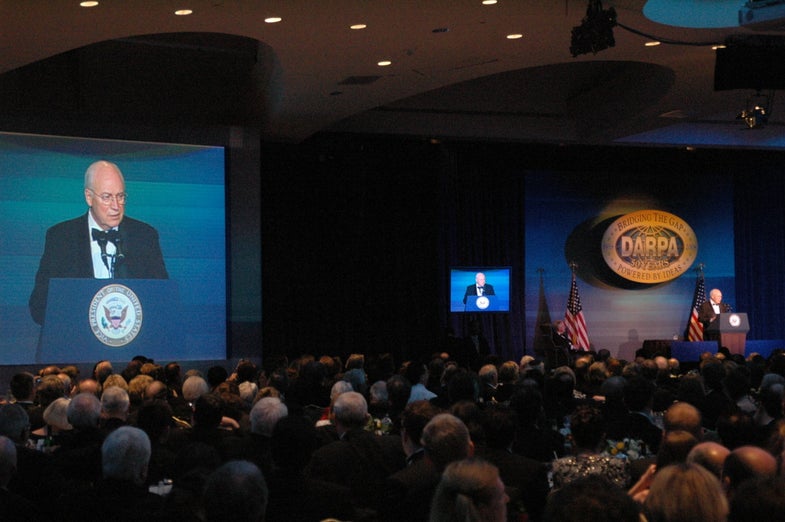 The Defense Advanced Research Projects Agency, or DARPA, celebrated its golden anniversary last night in typically low-key style with a banquet here at the Washington Hilton.

The 1,600 tuxedoed attendees included nine former DARPA directors, program managers past and present, and scientists and engineers from DARPA’s contractors in the private sector and academia.

“Over the years DARPA has responded to issues of national importance with new ideas and technology that have changed the way wars are fought,” director Tony Tether told the gathering before dinner, and, he added, not incidentally, “changed the way we live.”

Case in point, the Internet. Among the VIPs Tether introduced before dinner were Bob Kahn, co-creator of the TCP/IP networking protocol at the core of the modern Internet, and Larry Roberts, manager of the DARPA project that became the Internet.

Vice President Dick Cheney showed up after dinner to acknowledge DARPA’s importance to the country, saying “Anyone who seeks the very definition of high intellectual standards, creative energy, and hard, persistent effort, will find it at DARPA. It’s a huge credit to the Defense Department and to the nation.”

DARPA owes its existence to the Soviet Union’s launch of the first satellite in 1957, just like another government agency that was started at the same time, NASA. In fact, until that other, more massive, organization could get rolling, DARPA was America’s space agency, funding Wernher von Braun’s team in starting work on the clustered rocket engine technology that would later send people to the moon.

After NASA took over the space program, DARPA found a new mission in creating advanced computer technology, which in 1969 became the ARPANET, the foundation of the Internet.

Today DARPA’s back in the space business, still funds advanced computing, and now funds advanced research in such areas as bionic limbs, biofuels, super efficient solar panels, self-driving cars, exoskeletons, and much more. At least half of DARPA’s work is classified and may never see the light of day. The other half includes technology that could prove as beneficial to civilian life as the Internet.

Not that DARPA goes around touting its accomplishments. Like those gathered for last night’s rather subdued party, DARPA prefers to go about its business quietly and efficiently and without attracting a lot of public attention. At the end of the evening, the celebrants quietly faded into the night, attracting little notice from the hotel’s other guests.