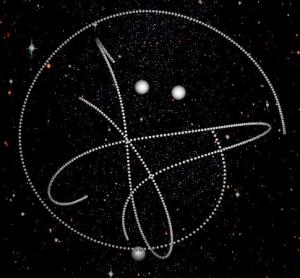 What’s cooler than a black hole? Two of them, rotating around and then crashing into one another. And what could be more entertaining than that cataclysmic cosmic dance? Why, one more, of course.

A team of scientists at the Rochester Institute of Technology has simulated the merger of three black holes.

The group, which previously produced a breakthrough simulation of a black hole duet, has now used a supercomputer to model the evolution, orbit and collision of three matter-swallowing monsters. The new paper, which will be published in Physical Review D, also details the specific gravitational signal that this mix-up should produce. Ideally, gravity wave detectors like LIGO (Laser Interferometer Gravitational Wave Observatory) and the planned Laser Interferometer Space Antenna, LISA, will be able to pick up this triplet signal, and demonstrate that the enormous collisions actually happen in the universe.

Check out the simulations here.