Saturn’s Moon Rhea May Have Rings, Too

The first ringed moon is discovered off the ringed planet 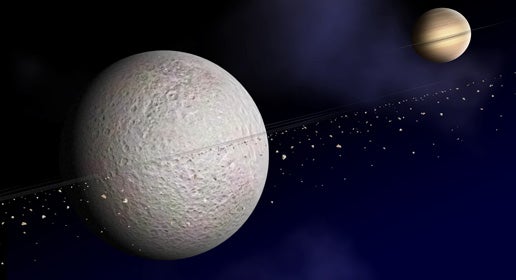 The Cassini spacecraft has uncovered evidence of a ring of space dust orbiting the second largest of Saturn’s moons, Rhea. No other moons have ever been found to have rings, so this could be a first, but it may also provide some interesting clues to Rhea’s past. When it captured the data in November 2005, Cassini was actually looking for evidence of an atmosphere around the moon.

The debris most likely consists of particles ranging in size from pebbles to boulders, and the ring extends several thousand miles. Scientists say that the space dust may be left over from a massive collision. If a large asteroid or comet hit the moon at some point in its distant past, this could have kicked up the debris. Cassini is due to pass by Rhea again in 2010. Scientists hope to gather more information then, but they say the probe will be on a safe course, and won’t be in danger of running into any of those orbiting rocks.