Birth of a Planet

Astronomers find evidence of what may be a planet in formation 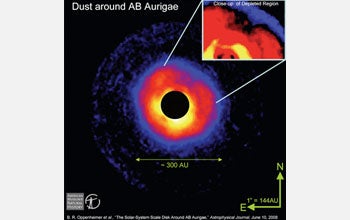 News of another extrasolar planet hardly grabs headlines anymore, now that scientists have pushed the count far above 200. But yesterday a group of astrophysicists says it may have uncovered evidence of a foreign planet being born.

The actual image they captured shows an absence of material around a young star, AB Aurigae. This void could be evidence of an object-in-formation that may be somewhere between 5 and 37 times the mass of Jupiter. Astrophysicist Ben Oppenheimer of the American Museum of Natural History suggests that it could be a planet or a brown dwarf–an object that falls somewhere between a planet and a star. But good looks at these extrasolar objects are hard to come by because their host stars–the ones they orbit about–outshine them.

“The image produced speaks directly to the biggest, unresolved question of planet formation–how the thick disk of debris and gas evolves into a thin, dusty region with planets,” says Julian Christou of the National Science Foudnation. The work will be detailed in the June issue of Astrophysical Journal.