New Glory: A Flag for a Terraformed Mars

PopSci reviews a bevy of reader-submitted flags and comes up with a winner. Drumroll, please...

When PopSci published Will Snyder’s article on terraforming Mars, we opined that the Mars Society’s colonial flag could use some sprucing up, so we asked readers to submit their own designs. The week the article appeared, 42 Martian-flag mockups turned up in our inbox. Some featured elaborate designs and detailed explanations (which we’ve printed in their entirety in the slideshow), while others simply included a name. A couple flags were even sent anonymously.

We promised readers that we’d award our favorite flag with a year’s subscription to Popular Science and submit the winning design to the Mars Society for consideration. After much internal debate (the PopSci staffers are a contentious lot), we narrowed the field to two finalists: Christian Garcia’s [above] and Michael Richardson’s [left]. Both flags got strong marks for composition, but they also both elicited a bit of head-scratching from the panel of judges. One panelist remarked that Richardson’s flag reminded him of Cameroon’s; another said that Garcia’s flag seemed to be representing Saturn. (The ellipse in the background of Garcia’s design is intended to represent the solar system). In any case, when the tally came in, Garcia was the winner, with 20 votes to Richardson’s 10. We liked the symbolism of Richardson’s so much, though (the transitional colors represent Mars-the Red Planet-transforming into another Blue Planet), that we’d like to offer him a subscription to the magazine as well. Congratulations, gentlemen, and thanks to everyone who submitted designs for this contest.-The PopSci Editors

I believe it is self-explanatory.-Miguel Rosado

The only regret that anyone could have nowadays is that we won’t be around to see it completed. Even so, here is my idea for the Martian flag. The planet in the center is similar to the American flag in that it will become more and more green and blue as Mars becomes more inhabitable (similar to the stars on the American flag with its stars that increase in number with the addition of a state).-Anthony C. Kwentoh

The symbol is a composite of the traditional ancient symbol for Mars. I felt that it was important to signify that Mars is the fourth planet from the sun, thus the number four is prevalent in the design. The star in the center represents our sun… surrounded by what is our universal desire and need for expansion. The colors were chosen to represent the change from the current red-orange color of the planet to one more like earth, with the blue and green.-Michael Richardson

When researching the purpose of the Mars Society’s flag, I discovered that it was actually quite well-designed. This is taken from a website: “The red, green, and blue colors derive from the stages of Mars’ transformation from barrenness to life depicted in the epic “Red Mars,” “Green Mars,” “Blue Mars” trilogy written by Kim Stanley Robinson. Red stands for the current desert, green for a 2nd step planet with vegetation and blue for the fully terraformed blue planet Mars. Red, green, and blue are also the primary components of the spectrum, symbolizing unity in diversity, as well as light itself and thus reason and enlightenment. The tricolor form also traditionally represents the republican values of liberty, equality, and justice.” (astrosociety.org) So, the validity of the red, green and blue flag is quite apparent. However, it is too boring to symbolize an entire planet and can too easily be confused with other national flags (i.e. France). Respectfully, I felt that my flag had to incorporate these colors. However, in my version I decided to make the green the background with the red and blue meeting just below the dipiction of the transforming Mars. This represents the craddle of life for which Mars will be as well as a symbol of unity and peace (resembles the peace symbol, but not quite, since the origin of the peace symbol is from the upside-down cross attributed to the anti-Christ). The configuration of the transforming Mars and the three stars is that of the symbol for Mars (I guess this is where I ask for permission to use the pictures from your article). I’ve read that, though it is usually tiped with a point, the Martian symbol used to be represented by a rotated Venus symbol, therefor ending in a cross. The three stars can represent both configurations. The larger, blue star represents Earth. Its configuration at the end of the ‘point’ symbolizes Mars’ connection with Earth. The other two stars represent the Martian satelites Phobos (the larger, white star) and Deimos (the smaller, white star).-C.J. Davis

I tried to keep it simple and give every element a purpose. Blue field: represents the “ocean” of space and reflects our naval explorations of the past White star: located in the canton it represents Earth and is always visible on the flag even when draped. This puts a focus on the heritage of the Mars explorers White stripe: represents the settlement of Mars in peace and cooperation. Red “ball”: represents the planet Mars itself.-Landon Knauss

Oh, what the hell. Here’s my idea — an obvious approach really. (Please note that this flags is in accordance with the five standard principles of flag design as enumerated by the North American Vexillogical Association [nava.org].)-Bruce Lewis 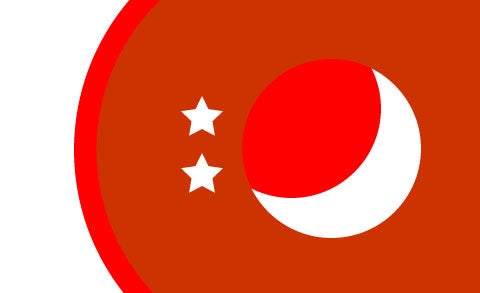 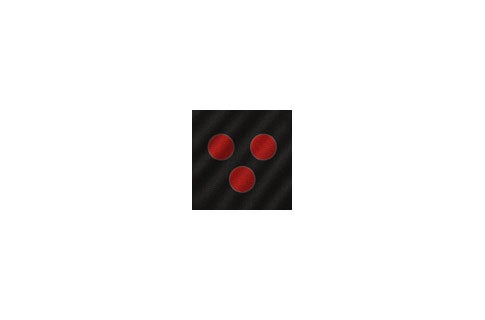 The big white circle is Mars. The background ellipse means that the planet is part of our solar system. The four little circles below mean Mars is the fourth rock from our sun. The red background reflects Mars´ soon-to-be past. It will only nostalgically be referred to as the â€red planet.â€ Everything is in symbol format, as to portray a universal language.-Christian Garcia 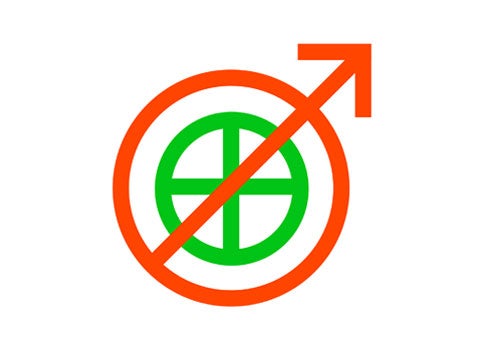 My flag design reflects the interplanetary concept of “Earthlings go home!” I think this is a clear and appropriate signal to the red planet’s nearest neighbor.-Mike Pettengill 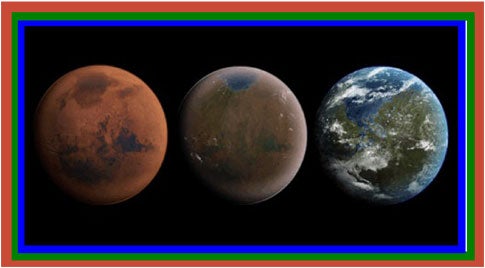 The borders of the flag should be metallic to provide a shimmering effect and give the depth of the color in the current atmosphere of Mars. As the atmosphere approaches that of Earth´s, the colors of the interior flag will become more vibrant, and the borders will lose their prominence. The black field is intended to have the same effect as the black background of space. The reverse of the flag should have the planets in reverse order. When light shines through the flag, the colors of the planet´s three stages will have more depth and color. This effect will also be enhanced with the Mars atmosphere is allowing the same (full) spectrum (including absorption and scattering) of light on the surface of Mars to be the same as Earth is today. -James Choate 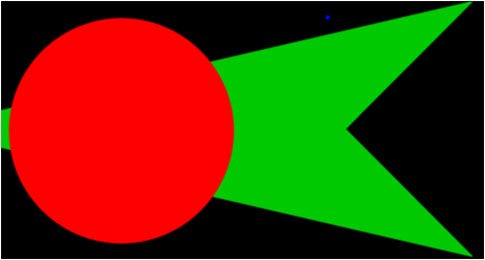 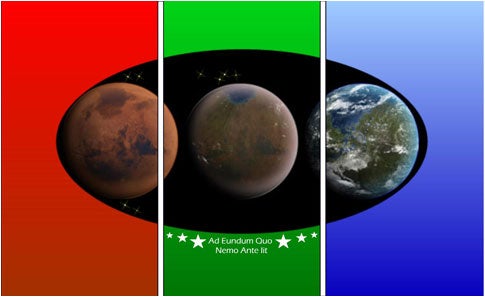 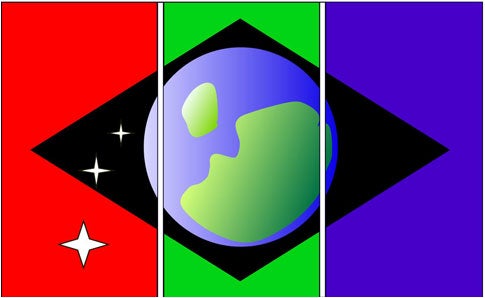 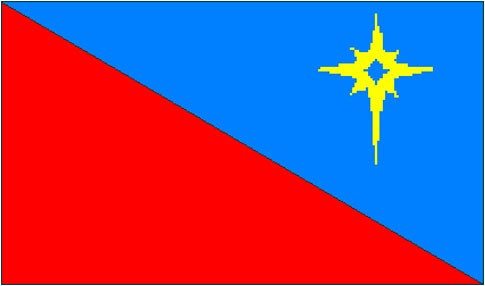 Kind of a â€keep it simpleâ€ kind of thing.-Mike Huffman 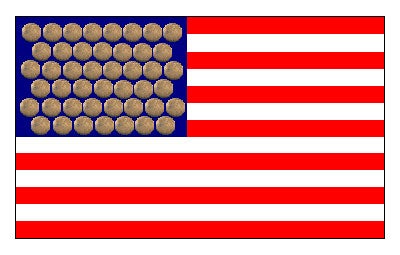 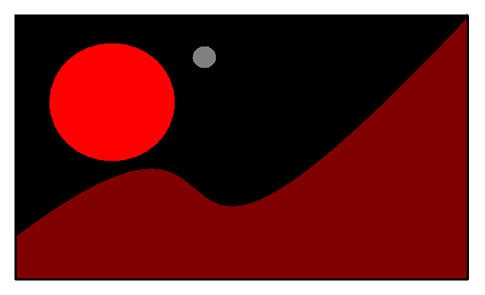 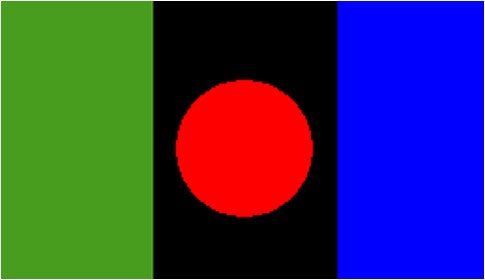 The green is for grass and nature. The blue is for water, and the black is for space. The red circle is for Mars and how it looks now.-Clinton K. 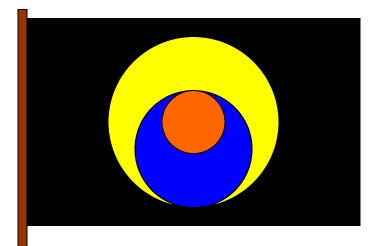 It´s a rather good design for what it represents. The colors could be deepened a bit, but otherwise it works precisely. The planet could be centered, but off-set is more visually interesting. The planet is raised slightly above the center line (in the red field) to represent the planet’s history. The green field represents the future, and the planet-field would represent the future (current) Mars while the terraforming was already under way. A sun could even be added somehow to represent the illumination of Mars’ future.-Stewart Perthou

The Latin translates into â€Land from Death to Life,â€ and the branches represent peace. The globe in the center represents all the nations that will work on Mars missions. The background was meant to have the gray represent death, and then it blossoms into life in red.-Kellen Blake

The black background evokes the distance from Earth and the necessity for Martian self-sustainability. The red orb obviously represents Mars. The three spears (white, green and blue) evoke elemental requirements for life (oxygen, flora/fauna, water, respectively), which we must cultivate in our endeavors to create a new home. The yellow font represents both the sun’s faint glow and the abundant energy it can still provide. The text reads “Born of the Stars and Mankind: A New Home,” and it represents the tireless work required in ensuring a lifeline for all of humanity.-Adam D. King

It has the sun, Earth, Mars and all five colors of the Olympic Rings (at least one color from each country’s flag).-Koren Plummer

Elements contain: stars, the green color for the color of life, the blue outline for the earth shadow, the yellow star to represent the sun, which reflects off the tree, and the red background for the “red planet” idea, which I bet everyone used.