While the rocket races will have to wait a year, inventors showed off plenty of private space technology at this year's X Prize Cup showcase

The X Prize Cup, an annual rocket race and showcase set to touch down every October in Las Cruces, New Mexico, held its inaugural gathering on October 9. Founder Peter Diamandis, whose X Prize Foundation last year awarded $10 million for the first private manned spaceship, plans for the XP Cup to be a chance for space fans to meet the engineers and pilots of a new generation of commercial spaceships and to watch them compete in rocket races both in and out of the Earth’s atmosphere.

Yet so far only one company, Scaled Composites in Mojave, California, has launched a person into space without government help funding, and the first rocket races are scheduled for next October’s XP Cup. Therefore, with notable exceptions, most of the ships on display were mock-ups or small-scale technology demonstrators of proposed spacecraft, not full-scale working models.

Click here to see these prototype spaceships and to learn more about how and when they’ll fly. 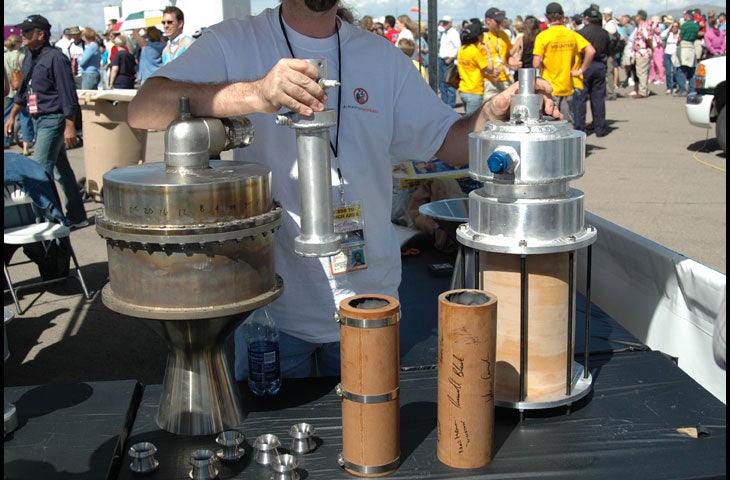 Armadillo Aerospace, led by videogame programming whiz John Carmack, plans to launch a manned suborbital rocket by the end of next year. Unfortunately for us, Carmack left his spaceship-in-progress back home in the shop. He did, however, show an early Armadillo design for a stainless-steel, hydrogen-peroxide-powered rocket engine [left]. In addition, he brought his aluminum, liquid-oxygen-and-ethanol engine that will power the suborbital ship [right]. Armadillo welder James Bauer [center] holds the engine design used by the small-scale Armadillo rocket flown at the X Prize Cup. 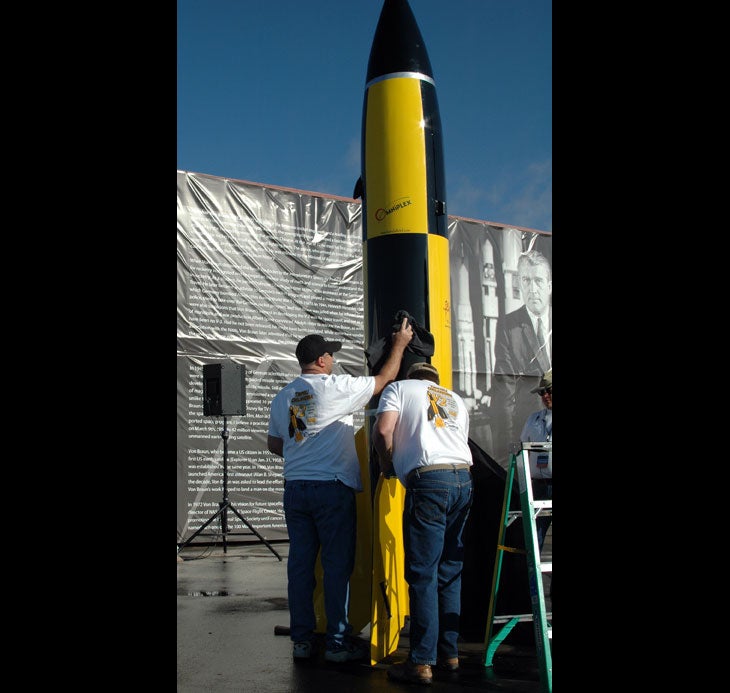 VON BRAUN WOULD BE PROUD

Members of the Tripoli amateur rocketry association polish a one-third-scale model rocket of the World War II-era German V2 rocket. Tripoli’s planned launches at the X Prize Cup were scrubbed because of high winds. The group was demonstrating its technology but is not planning a larger model for human flight. 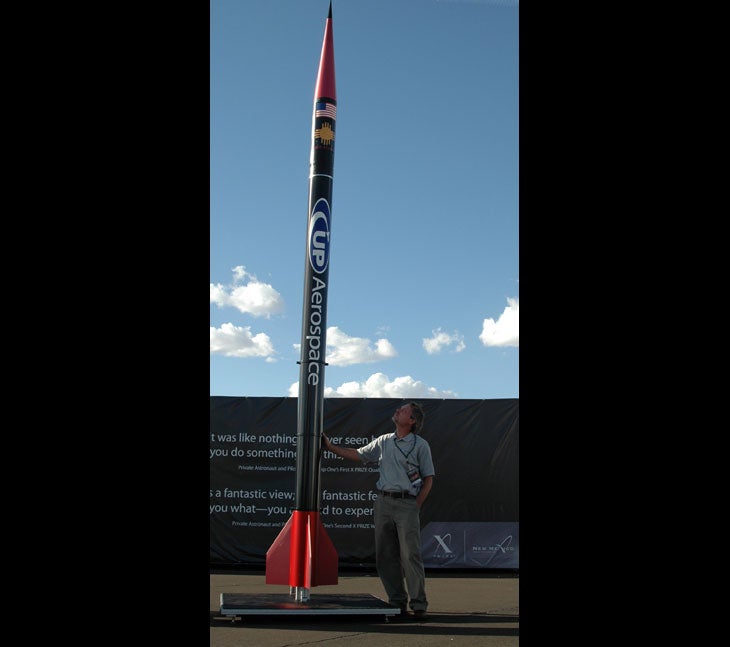 The solid-fueled SpaceLoft, built by UP Aerospace and shown here with company president Jerry Larson, was the only rocket at the X Prize Cup actually capable of reaching space. Its predecessor, the GoFast rocket, became the first amateur-built rocket to reach space in May of last year. 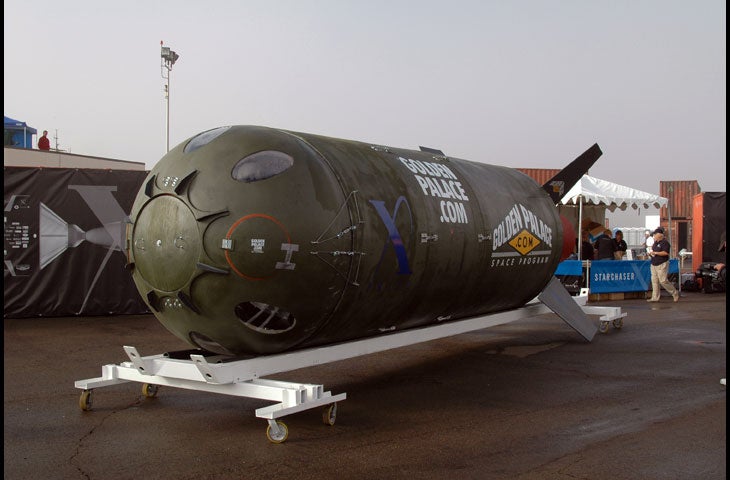 Brian Feeney, a self-taught industrial designer from Toronto, has put together what he calls the world’s largest volunteer engineering effort, the da Vinci Project, in a bid to launch himself into space. He’ll ascend to 80,000 feet in this capsule-and-rocket-block combo dangling from the bottom of the world’s largest helium balloon, at which point he’ll light the rocket to reach space. After reentry the balloon, capsule, and rocket block will land separately on parachutes. 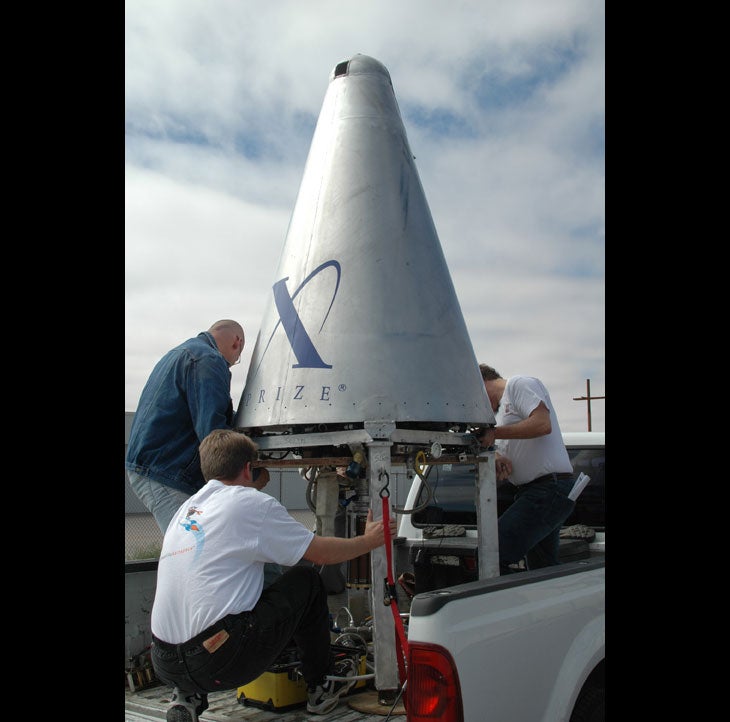 Armadillo’s 10-foot-tall technology demonstrator took off, hovered, and then descended gently under power, just like its planned suborbital big brother. After the first of its three planned flights at the X Prize Cup, though, the rocket touched down with only one of its four legs on its steel-plate landing pad. The other legs sank into the mud beside the pad, and the rocket tipped over and crashed to its side. It was damaged too badly to fly again. 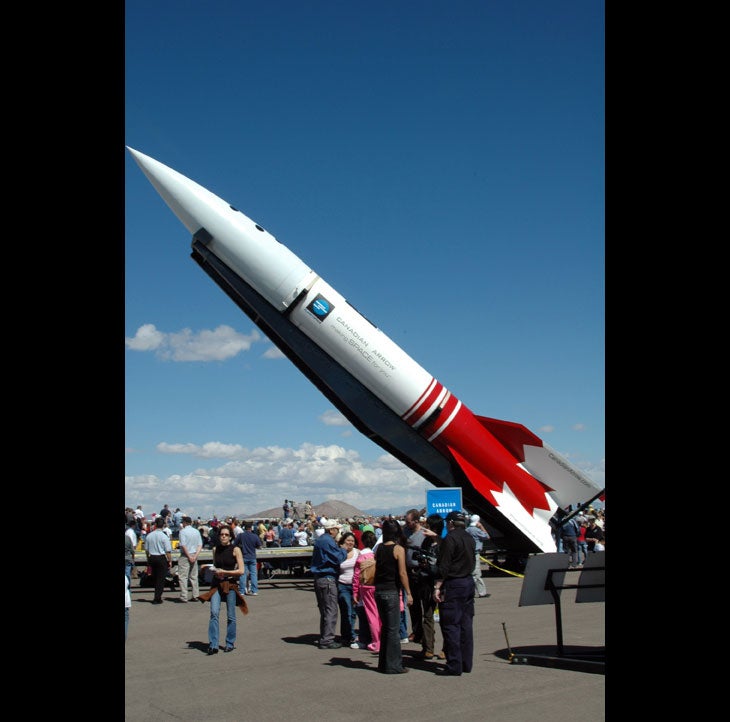 Shown here, a full-scale model of the V2-derived manned suborbital rocket under construction by Canadian Arrow. Like Armadillo, the Canadians left their actual flight hardware at home. 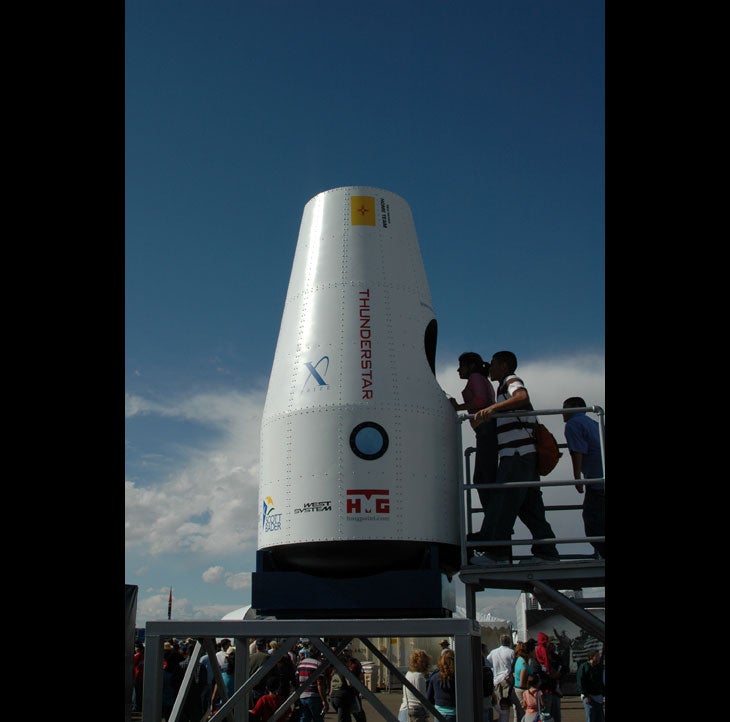 Starchaser’s three-man space capsule will ride to suborbital space atop an 80-foot rocket. The rocket’s engine exploded on the stand at the close of the X Prize Cup, making EZ Rocket’s two flights the only successful demonstrations at the event. 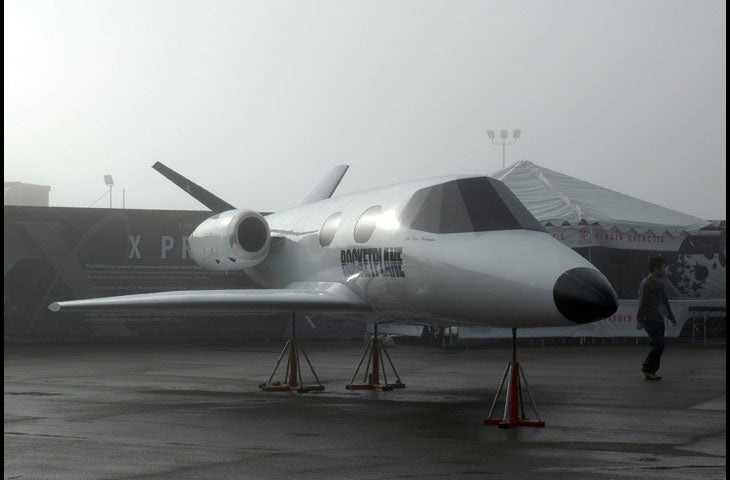 THE NEXT BEST HOPE FOR SPACE

Rocketplane Ltd. in Oklahoma may be the next private company to fly people into space. Flight testing of its jet-and-rocket-engine hybrid is scheduled to begin next year, with suborbital tourist flights to begin in 2007. The rocketplane will jet to 20,000 feet before lighting a liquid-fueled rocket engine in its tail for the boost to space. After reentry it will restart its twin jet engines for landing. 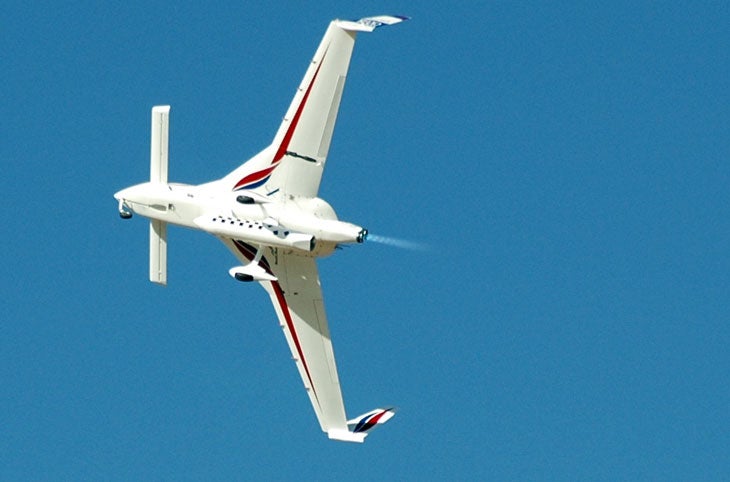 READY FOR THE RACES

The only manned craft to fly at the X Prize Cup was XCOR’s EZ Rocket, a modified Long-EZ airplane powered by twin liquid-oxygen-and-alcohol-burning rocket engines and flown by former space shuttle commander Rick Searfoss. The EZ Rocket is the prototype for a quartet of planned Rocket Racers that are to fly at next year’s X Prize Cup.
armadillo aerospace
Diamandis
private spaceflight
rockets
scaled composites