Around the World in 80 Hours

Adventurers Steve Fossett and Richard Bransonâ€”with a little help from design genius Burt Rutanâ€”build an airplane for what they're calling the last great aviation record: a solo, nonstop around-the-world flight. 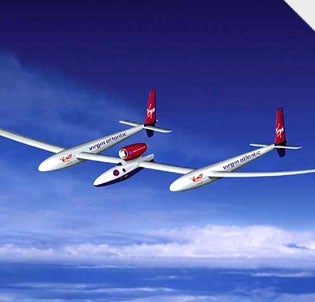 October 23, 2003–London. Around the world on a single tank of gas has been done. Dick Rutan and Jeana Yeager accomplished the feat in 1986, flying Burt Rutan’s brilliant propeller-driven Voyager aircraft. It was a gruelling nine-day ordeal for the duo, and it stretched aviation technology to its limits.

But Richard Branson and Steve Fossett think they can push the technology even further, and today the pair unveiled their plans to go one better–flying solo, and in only a third the time.

Sometime in mid-2004, the jet-powered Virgin Atlantic GlobalFlyer–also designed by Rutan–will take off from the United States, piloted by serial record-breaker Fossett, on an 80-hour voyage that will bring it right back around to the same airport. The aircraft has been in development for several years, and the first test flight is planned for December 17, the centenary of the Wright Brothers’ first flight. Virgin founder Branson is bankrolling the project and will also act as backup pilot.

The GlobalFlyer is clearly a Rutan creation, resembling both the original Voyager and Rutan’s current White Knight, the mothership for the SpaceShipOne rocket vehicle that Rutan hopes to launch on suborbital flights–becoming the world’s first private manned space program–sometime in the next year. GlobalFlyer‘s three-body layout spreads the weight of the airplane across the wing, reducing the peak bending load and enabling Rutan to make the airplane lighter. (If you hang all your clothes in the middle of the closet rod, it will bend. Spread them from one end to the other and it won’t.) It can carry more than four times its own weight in fuel, enough to power the single Williams FJ44-3 engine for the entire flight. (The Williams engine is a conventional business-jet turbofan, but it is a technically advanced powerplant, computer-controlled and with an elegantly contoured, high-efficiency fan that’s carved from a single block of titanium.)

GlobalFlyer‘s all-carbon-fiber airframe draws on White Knight and Rutan’s other projects. The controls are conventional–no fly-by-wire–but computer-aided aerodynamics and a good deal of experience have helped to refine the aerodynamic details, compared with the early-1980s design of the Voyager.

The aircraft will ride the jet stream around the world, so it can make the 24,000-mile circuit as though it were only 21,300 miles. That is 75 percent farther than the absolute range record for jet-powered airplanes, set by a B-52H bomber back in 1962. The secret is a number called the fuel fraction. Today’s longest-range airliner, the Airbus A340-500, can carry a fuel load that’s 45 percent of its total weight. On takeoff, some 84 percent of the ultralight GlobalFlyer‘s weight will be fuel–handily beating even Voyager, which had a fuel fraction of 72 percent.

Fossett is no stranger to bold risks–he holds numerous official aviation and nautical world records, including the first solo balloon flight around the world–but the biggest challenge here may be human frailty. The mission will require him to stay awake for 80 hours straight. Is he anxious? “This will require all of my abilities as a pilot,” he said. “It will test my endurance. It’s an experimental aircraft and with such lightweight construction there’s a risk of structural failure.” In fact, he said, “the first time it flies with a full load of fuel will be when I take off on the mission. Let’s just say I’ve got to really want to do it.” (In the event of a problem at 52,000 feet, the plane has two large parachutes designed to slow its descent, giving Fossett time to bail out safely.)

The cost? “Less than you’d imagine but more than I’d like,” according to Branson–though the GlobalFlyer, decked out in Virgin livery, will provide value for the airline by generating an estimated $100 million’s worth of worldwide media coverage. Moreover, if successful, it will live up to Branson’s hope (and hype) by setting “the last great aviation record left inside the Earth’s atmosphere and the first great aviation achievement of this century.”

The GlobalFlyer will also be a test bed for new technology. Its control and communications systems, much more capable than anything available for the Voyager, will manage the mission in the event Fossett falls asleep. During that time, the airplane would be an unmanned air vehicle (UAV). In that respect, GlobalFlyer will explore the limits of range and endurance for a relatively conventional jet airplane, with features that could point to more efficient, longer-endurance UAVs–all of which could be of great interest to military contractors, such as Northrop Grumman, which acquired a large share of Rutan’s Scaled Composites company in an unpublicized 2001 deal. Meanwhile, the aircraft’s tremendous efficiency could influence commercial travel. “The manufacturers of the plane and the engine will generate unique data on improving future aircraft efficiency, which will help develop a new generation of more-fuel-efficient commercial aircraft,” Branson said.

Stay tuned to POPULAR SCIENCE for continuous coverage of this program.