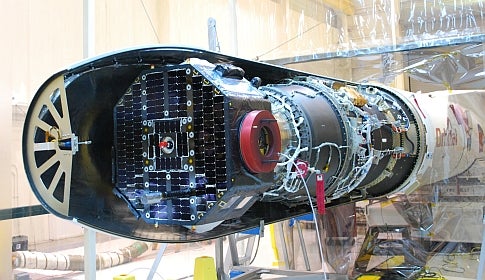 The “termination shock” sounds like the stuff science fiction movies are made of. In reality, it marks the boundary between our solar system and interstellar space. The invisible “shock” forms as our sun’s solar winds begin to encounter the gases and magnetic fields of outer space, which slows the winds down abruptly.

On October 19, NASA will launch the first spacecraft designed to image and map the interactions that take place in this boundary zone. The Interstellar Boundary Explorer, or IBEX, will be propelled from the Kwajalein Atoll into a high-altitude orbit that will eventually take it about 200,000 miles from Earth, where it will capture images of processes taking place in the termination shock and beyond.

“The interstellar boundary regions are critical because they shield us from the vast majority of dangerous galactic cosmic rays, which otherwise would penetrate into Earth’s orbit and make human spaceflight much more dangerous,” said David J. McComas, principal investigator of the IBEX mission and senior executive director the Space Science and Engineering Division at the Southwest Research Institute.

In December 2004, the Voyager 1 spacecraft first crossed the termination shock, and earlier this year Voyager 2 reached the same landmark, but at a point substantially closer to the sun than Voyager 1 had been. According to McComas, Voyager observations of points beyond the termination shock have shown results that challenge many notions about this region. Images from IBEX will, for the first time, help scientists understand the processes that take place in the region where our solar system reaches interstellar space.

The IBEX spacecraft will be launched on a Pegasus rocket dropped from an L-1011 aircraft as it flies over the Pacific Ocean. The Pegasus vehicle will then carry IBEX into an orbit approximately 130 miles above the Earth. According to Willis Jenkins, IBEX program executive at NASA headquarters in Washington, the IBEX mission is logistically unique as well because it has an extra “kick” during launch. “An extra solid-state motor pushes the spacecraft farther out of low-Earth orbit where the Pegasus launch vehicle leaves it,” he said.