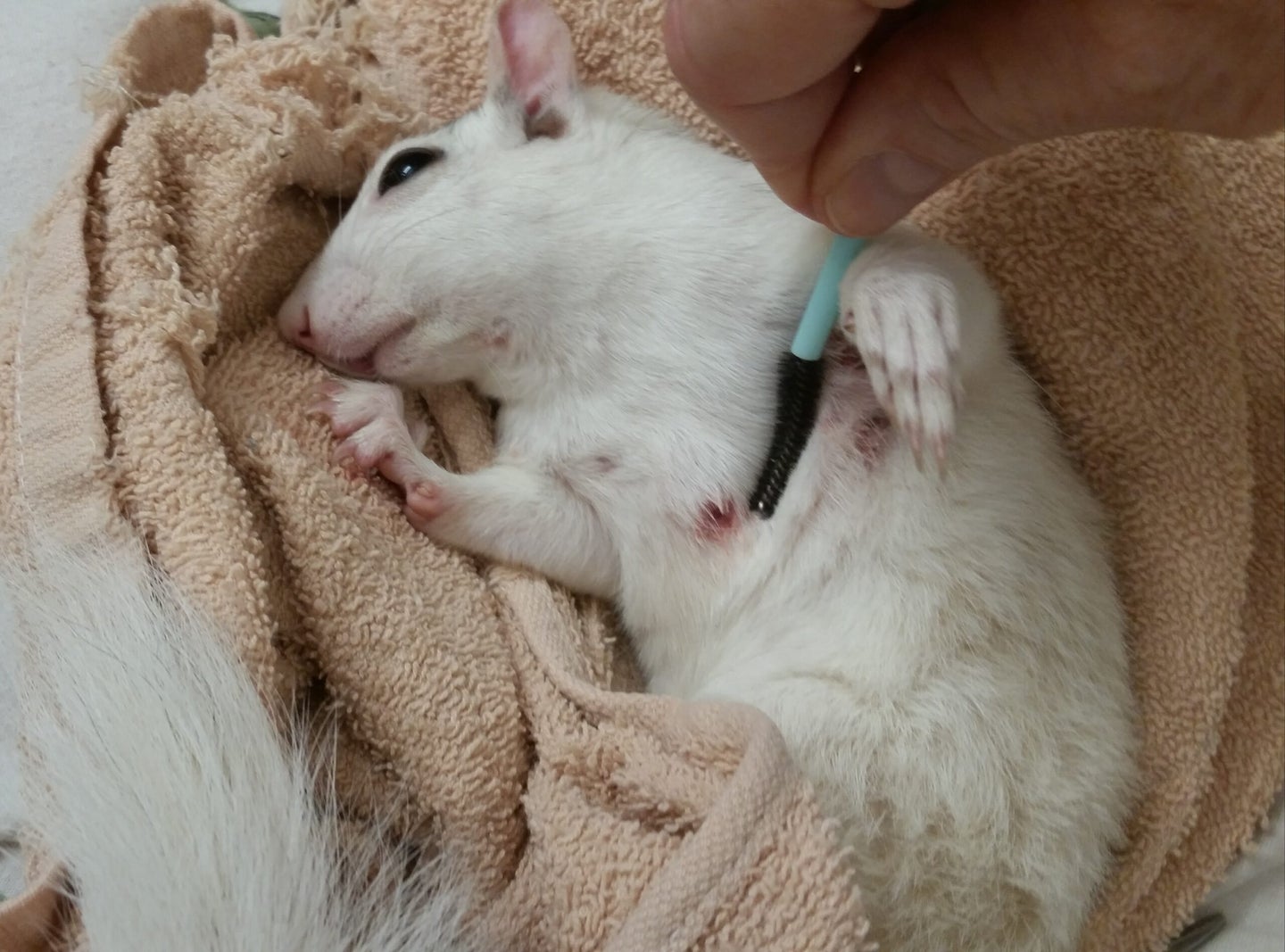 From cosmetics to cuddly squirrels, used mascara wands find new life at the Appalachian Wildlife Refuge. The small, non-profit wildlife rehabilitation center in western North Carolina receives thousands upon thousands of old eyelash implements from people around the country. And the cause is much nobler than giving woodland creatures luminous lashes.

In Appalachia, small animals like squirrels, rabbits, and songbirds often bear the brunt of human activity. We cut down the trees they nest in, we hit them with our cars, and our cats and dogs drag them to our doorsteps, among other unfortunate situations. The goal of wildlife rehabilitation is to get these animals healed and back into the wild as quickly as possible. In cases when they’ve been seriously injured beyond hope of returning to their natural habitats, rehabbers may use them for education purposes to teach others about wildlife rehabilitation, but only if they’re comfortable.

Founded in 2014, Appalachian Wild ran a network of at-home “rehabbers”—volunteer medics with state licenses to rescue and rehabilitate wild animals. They’re thoroughly trained, and some have been doing this for decades. Last summer, the organization opened a donation-funded urgent care center with its own staff. Kimberly Brewster, co-founder of Appalachian Wild, calls it an “emergency room for the injured and orphaned native wild animals in our area.” Similar models have been adopted all over the world.

While a typical emergency room’s bread and butter may be scalpels, hospital gowns, and blood pressure monitors, Appalachian Wild’s is the ever-soft (and ubiquitous) mascara wand. It’s somewhat of a trick of the wildlife rehabilitation trade, says Janice Burleson, who’s been caring for injured and orphaned wild animals out of her home for over 20 years.

When rehabbers determine that an animal needs help, they typically start by checking it for wounds and cleaning it off, as it will have picked up all sorts of stubborn particles that need to be removed to prevent infection. Burleson says that would be a long ordeal with a lice or flea comb but, strangely enough, a mascara wand does the trick perfectly—and saves rehabbers hours of time.

“It works miracles,” Burleson says. The bristles are close enough together (but not too close) to remove fly eggs, larvae, and mites from the animals’ fur in one fell swoop. They’re also soft enough not to harm the animals. In fact, rehabbers say some of their furry patients love being cleaned with them.

“They will just lie flat on their backs with their arms spread,” says Jennifer Burgin, a licensed wildlife rehabilitator who’s spent three decades caring for western North Carolina’s furry friends. As far as she knows, she was the first person to use an old mascara wand to clean a baby animal, a practice which has since been passed down among rehabbers across Appalachia, around the country, and even around the world.

“It’s part of being able to do a good physical exam on an animal,” Burgin says, adding that for squirrels especially, grooming helps bond animal parents and their babies. Many squirrels can be feisty and hostile when they’re first brought to a rehabber—they may be injured, and they’re in an unfamiliar place. To calm the squirrels down, Burgin grooms them just like their mother would.

Burgin recalls a particularly aggravated white squirrel that bit the person who first picked her up. The squirrel was covered in fly larvae and needed attention, and Burgin had to use a towel when holding her down to avoid being bitten herself. But once she started combing the squirrel with a mascara wand, the animal relaxed to the point where all Burgin had to do was lift her little paws out of the way to groom her.

Walk into a pet store and you’ll find countless gadgets for cleaning cats and dogs, but Burgin says there isn’t as much of a market for smaller, wild animals. She’s repurposed a host of household objects for wildlife care, from dollar store baskets (they’re small enough to keep the animals cozy while facilitating airflow) to children’s polar fleece hats (they create an insulated nest for baby animals without loose threads that could get caught on their legs).

“A number of the rehabbers would call me Mrs. MacGyver,” Burgin says.

After an original wand-soliciting Facebook post went viral in 2017, Appalachian Wild created a program called Wands for Wildlife to facilitate the donations. Since then, Brewster says Appalachian Wild has received over 50,000 used mascara wands, all sent by individuals happy to toss one less thing in the garbage and help an animal in the process. Appalachian Wild asks its beautifying benefactors to wash the existing mascara off the wands before they send them off (the goal is to clean the animals, not paint them), and staff further clean and sanitize the implements upon receipt. Wands for Wildlife has also roped in cosmetic manufacturers and distributors, who send in hundreds of thousands of new mascara wands that have defects or have been discontinued. They may be unfit for sale, but they’re still fit for the refuge’s furry patients.

Brewster says the last two years have been a whirlwind. She’s gone from asking for wand donations to figuring out where to send all the ones she’s received.

“It’s a magic wand wave, is what we’re riding right now,” Brewster says. She’s working on forming partnerships with distributors and other wildlife rehabilitation organizations. She’s sent wands across North Carolina, to Massachusetts, and even to Zimbabwe, and she’s getting requests from all over the world. And the wands just keep coming in—one of the rehabber’s basements, where all the donations are stored, is affectionately referred to as “wand city.”

Appalachian Wild expects to rehabilitate around 2,000 animals in 2019. While the wands can be reused a few times to clean these animals, there’s still so many left over, so Wands for Wildlife incorporated a wand art program to find an even more permanent home for them. Using the colorful handles and applicators, local youth construct murals of animals, which Brewster says could be auctioned off to raise money for the refuge in the future.

Wands for Wildlife inspires Brewster, who never imagined that such a simple household object could motivate so many people to care about saving Appalachian animals. Most of the wands she receives come with notes from people of all ages, excited to do their part to help the planet.

“I tell people I have trouble wearing mascara,” says Brewster, “because I cry when I get all these notes.”