Dick Tracy, eat your heart out 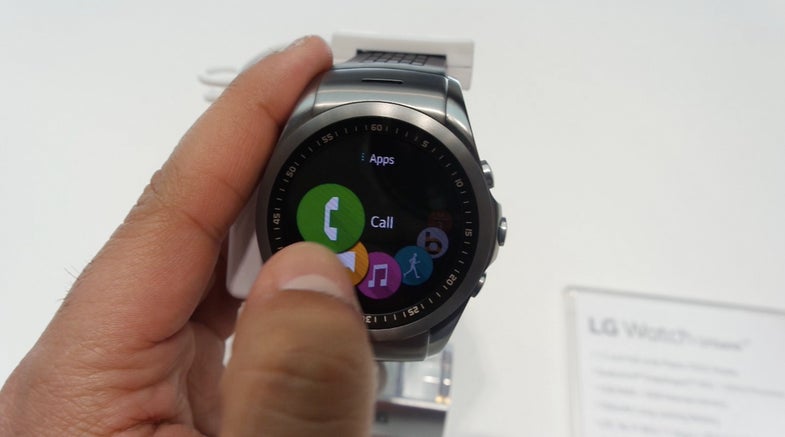 There are plenty of smartwatches out there, but a large majority of them need to be tethered to your smartphone in order to access the internet. There are some that can connect directly — such as Will.I.Am’s hideous PULS — but even that one can only connect using 3G. Now, the agonizing wait for a high-speed smartwatch is over.

The LG Watch Urbane LTE is the first 4G smartwatch in the world. You can make phone calls, text messages, send emails, and anything else you can do with your phone without tethering. Best of all, it doesn’t look like it was pulled straight out of a sci-fi movie. It has the same shape and design as the standard LG Urbane watches, but this one doesn’t run on Android Wear.

LG opted to run its Urbane LTE on its own operating system, webOS, which means that the app ecosystem pales in comparison to many of the existing smartwatches out htere. For some, that might not matter, though. The Urbane LTE comes preinstalled with a fitness app and a music app.

The Watch Urbane LTE has a 1.3-inch plastic OLED display that might be a little too bulky for some–so people with skinny arms should avoid this watch altogether. It’s one of thickest smartwatches we’ve ever seen (though justifiably bulky for some). The watch also runs on a 700 mAh battery that LG claims will last for several days in standby mode, but we find that hard to believe, especially given the extra battery drain from the 4G LTE antenna.

The watch includes a touchscreen, but it also has physical buttons. The buttons feel solid, and generally speaking, it’s a very solid device. The watch also includes NFC, GPS and a number of other standards in smartphones, which potentially makes it capable of replacing your phone altogether.

For most people, the LG Watch Urbane LTE will be a little too chunky. But for the precious few that want to live out their Dick Tracy dreams or simply track a bike ride without having to carry their phone around with them, the Urbane LTE is good enough to get the job done alone.