The Jefferson Memorial Is Slowly Being Covered In Slime

But it’s more common than you think 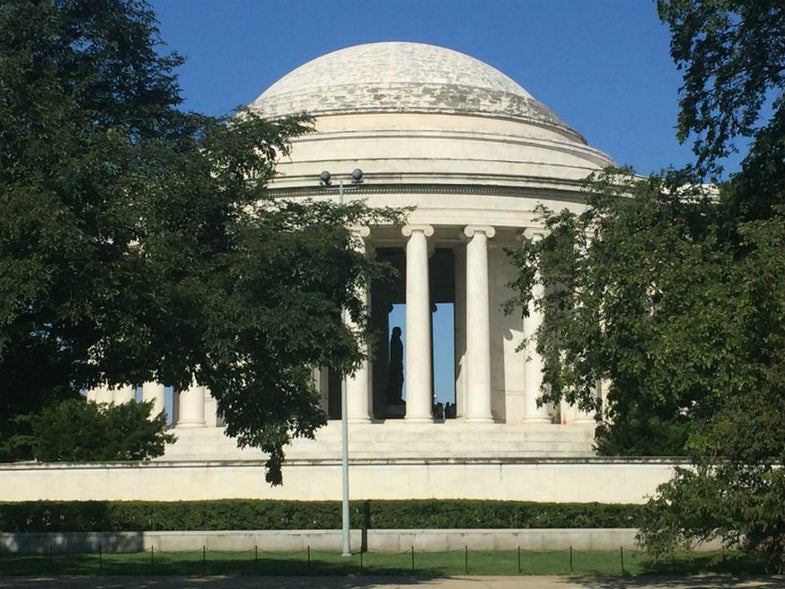 Quick! What lives on rocks in a stream bed, on the surface of your teeth, and now on the dome of the Jefferson Memorial?

It may sound disgusting, but the slime or gunk covering all three is biofilm, a crazy community of various microbes living communally. While some biofilms can be made up of one type of bacteria, many are combinations of bacterial species with fungi, algae, yeasts and others.

The slime we see, called extracellular polymeric substances, is created by the community, but while it’s gross and annoying (especially for those preserving federal monuments), it might not be that bad.

“What we are observing with lab-scale experiments is that the existence of microorganisms on artistic surfaces doesn’t mean deterioration,” Federica Villa, a post-doc at the Center for Biofilm Engineering in Montana told Popular Science. “They’re just there.”

But Villa also stresses that there are so many different kinds of biofilms on different kinds of substrates. Some can be bad (like for tooth decay), some will not do anything, and some can even be good. Some microorganisms are used to clean up chemical contamination on artwork, she says.

But with a monument as precious as the Jefferson Memorial, no one really wants to take the risk to see what kind it will be. Since 2014, a team of conservators, architects and molecular biologists have been trying to solve the biofilm problem, which has been growing steadily worse since 2006.

Though this is not an isolated problem, many monuments in Washington, D.C., and even places across the globe from Angor Wat to Hadrian’s Villa, have this problem. In 2011, the National Parks Service successfully removed biofilm from the D.C. War Memorial.

But that doesn’t mean that the biofilm won’t come back, when you can get rid of it in the first place.

“It’s like in our kitchen, we’re trying to get rid of mold,” Villa says. “It can come back again.”

And when it does, it may be harder to get rid of, as the microbes can form resistance, like some bacteria are resistant to antibiotics in medical settings, Villa says.

The National Parks Service has recently started trying out 10 chemical biocides in small patches of the Jefferson Memorial, and they will be soon trying some non-traditional options, such as ozonated water and irradiation with lasers, according to a NPS press release.

Until then, we can only hope for the best, or learn to live with a dome with an olive patina.