A new blind, predatory, subterranean ant species with ancestral roots dating back to more than 120 million years ago spurs a debate on the evolution of ants. 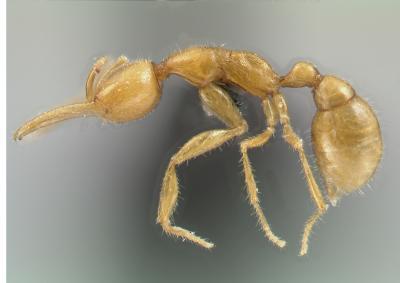 Sometimes the smallest discovery lends itself to the biggest insight. That certainly was the case for University of Texas at Austin graduate student Christian Rabeling, who found a new ant species in the Amazon that is likely the descendent of one of the first ants to evolve on Earth more than 120 million years ago.

Pale in color and blind with pincer-like mouthparts bigger that its head, the two- to three-millimeters long subterranean ant has been dubbed the “eureka ant from Mars” (Martialis heureka) due to its bizarre combination of features. DNA analysis reveals that the less-than-ordinary ant is from a new subgroup—bringing the total up to 21 subfamilies—and evolved earlier than any other living ant.

The ant ‘s lack of eyes isn’t what makes it stand out (despite what you’d guess), because there are other known ant groups that are also blind. Instead, the early roots of the latest subterranean subspecies challenge the commonly held notion that the first ants evolved from wasp-like surface dwellers. While the question is up for debate, scientists say there are many undiscovered species that probably still exist in the tropics which they need to find before habitats disappear.